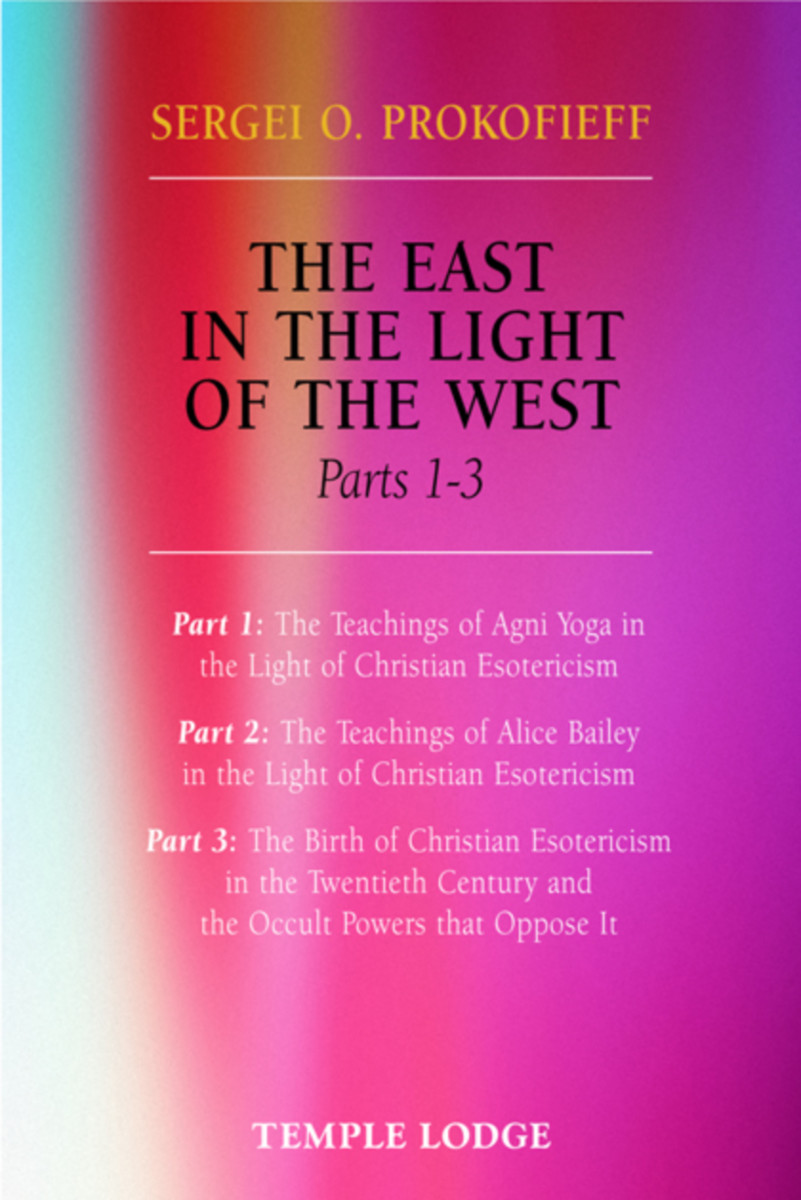 The East in the Light of the West

Part 1: The Teachings of Agni Yoga in the Light of Christian Esotericism

Part 2: The Teachings of Alice Bailey in the Light of Christian Esotericism

Part 3: The Birth of Christian Esotericism in the Twentieth Century and the Occult Powers that Oppose it

This major work comprises a comprehensive study of Eastern and Western esoteric streams and the occult powers behind them. In part 1, Prokofieff discusses the spiritual movement of Agni Yoga, presented to the world by Helena Roerich and her husband, the painter Nicolas Roerich. Part 2 focuses on the teachings developed by Alice Bailey, while part 3 considers the relationship between Eastern and Western spiritual masters and the esoteric streams they represent.

The first two parts of the book provide descriptions of the Roerichs’ and Alice Bailey’s philosophies, based on their own perspectives, together with anthroposophic commentaries that offer an understanding of these two streams in the light of modern Christian esotericism. As Prokofieff points out, both the Roerichs and Bailey were convinced that the occult teachers who inspired them were the same as those to whom H.P. Blavatsky referred.

Part 3 deals directly with the mystery of the Eastern teachers, or mahatmas, and their relationship to Christian esotericism. On the basis of extensive research, Prokofieff comes to the startling conclusion that the occultists whom the Roerichs and Alice Bailey named as their leaders in fact have nothing in common with Blavatsky’s Eastern mahatmas. In Prokofieff’s words: “Hence...one has to do not with the Eastern mahatmas but with quite different occultists who had illicitly appropriated their names and then tried—while deliberately misleading their followers—to attain their highly dubious occult political aims with the help of the occult movements which had already been initiated.”

Prokofieff further asserts that this appropriation led to a distortion of the age-old Eastern philosophies, giving them an anti-Christian character, and led to phenomena such as “occult materialism,” insidious political goals, and prophecies of a physically incarnating “messiah.”

Previously available only in German as three separate books, with just an early version of part 1 published in English, this long-awaited translation of Prokofieff’s incisive study offers a fine training in discernment, judgment, and spiritual insight.