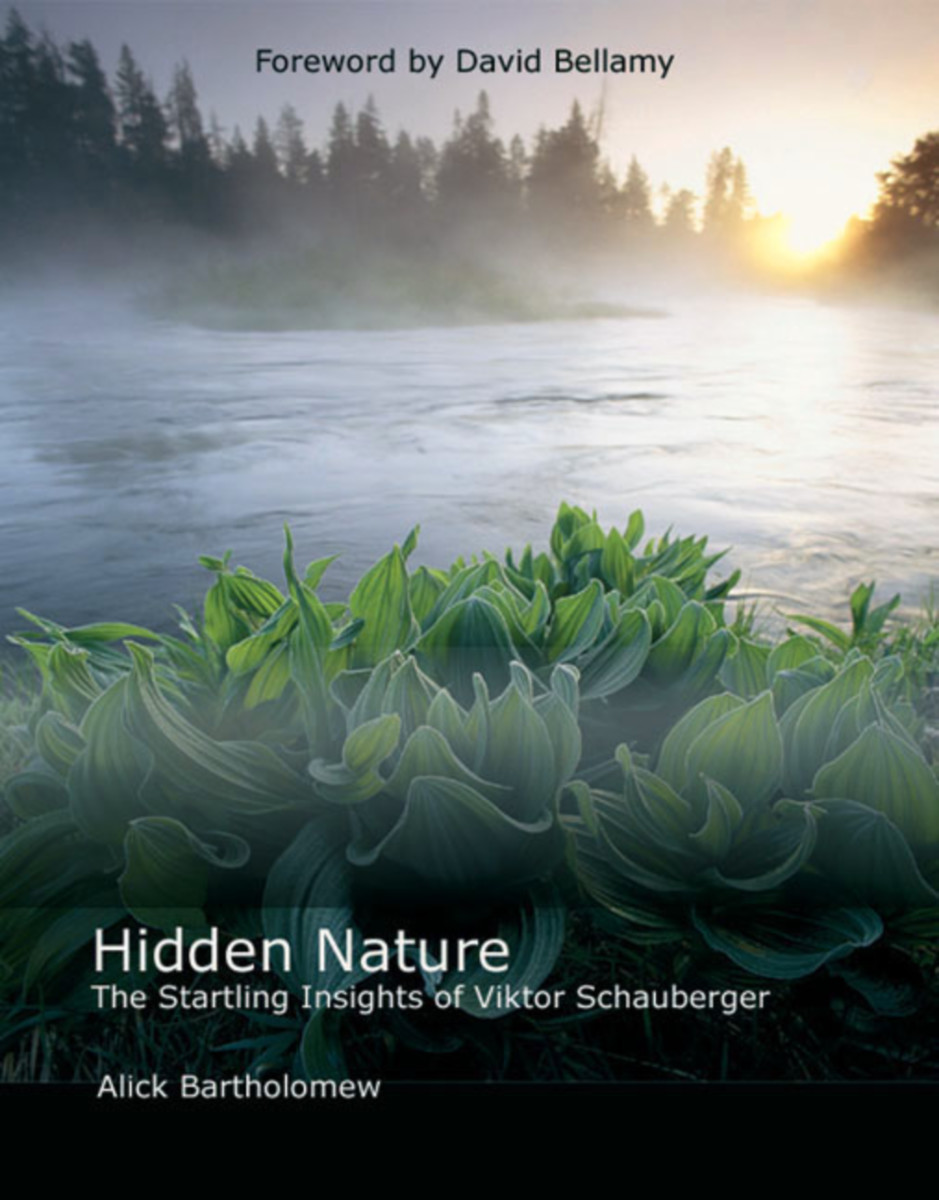 The Startling Insights of Viktor Schauberger

Austrian naturalist Viktor Schauberger (1885–1958) was far ahead of his time. From his unusually detailed observations of the natural world, he pioneered a completely new understanding of how nature works. He also foresaw, and tried to warn against, the global waste and ecological destruction of our age.

This book describes and explains Schauberger's insights in contemporary, accessible language. His remarkable discoveries—which address issues such as sick water, ailing forests, climate change, and, most important, renewable energy—have dramatic implications for how we should work with nature and its resources.

“The book seeks to explain its concepts in simple language, assisted throughout by clear and well-annotated illustrations. Thought-provoking.” —Jeff Sanderson, Light, summer 2004

“Hidden Nature is a comprehensive breakdown of Viktor Schauberger's stunning ideas and observations. Alick Bartholomew strips away the complexity of Callum Coats’ book Living Energies, in order better to understand Schauberger's main themes. It will certainly transform your views on water. The graphics are the clearest I've seen in any book on Schauberger. I highly recommend it if you want to learn about Schauberger's natural science.” —Amazon UK review

“Hidden Nature gives a context for Schauberger's thinking and brings it into the framework of later understandings, such as Gaia theory and Lawrence Edwards' work. As one reads this very accessible book, one is left with a growing sense that his system is so simple, so sensible and rooted in reality, that one wonders why on earth more people don't know about it.” —Jane Cobbald, Star and Furrow, Winter 2003

“Alick Bartholomew is in a very good position to have written this introductory overview of Schauberger's work for the general reader. With its readable text and informative illustrations, this is an essential primer.” —David Lorimer, Scientific and Medical Network Review, Spring 2004

“A spacious and well-presented book with plenty of diagrams. The concepts are explained well. Fascinating and thought-provoking.” —Reforesting Scotland, Spring 2004

“The book’s scope is very broad and it is intended to be more accessible to the lay reader than the technical publications on Schauberger.... It has always puzzled me that Jack and Jill went *up* the hill for their water. The ‘anomaly point,’ central to Schauberger's understanding of how true springs form, might be a clue.... Schauberger's ideas, ideals even, resonate strongly with the modern debate about sustainability.” —New View, December 2003

“This is a timely book on a profound subject.... Hidden Nature reveals a timeless wisdom requiring urgent attention ... Water may seem to you so ordinary, but this book will totally transform your perception of it. After reading Hidden Nature you will know that it is the most precious substance on the Earth.” —Satish Kumar, Editor, Resurgence magazine

“Alick Bartholomew tells how in 1950 Richard St Barbe Baker arranged for Schauberger’s son, a trained physicist, to talk to a group of atomic physicists at Birmingham University. A few weeks later, Baker asked the scientists if they had held a postmortem on Schauberger's presentation. ‘Yes indeed,’ they admitted; they had decided that it was ‘unchallengable.’ ‘Then what are you going to do about it?’ asked Baker. ‘Nothing,’ was their retort. ‘Why not?’ ‘Because it would mean rewriting all the textbooks in the world.’ That, in my view, is reason enough to read this book.” —Jane Cobbald, Star and Furrow, winter 2003

“Alick Bartholomew provides a fitting first glimpse [of Schauberger's insights and inventions] with Hidden Nature. If you've had enough of the mechanistic, materialistic worldview and are looking for an alternative approach that's based on a real appreciation of Nature's workings, this is the book for you.” —Ruth Parnell, Nexus Magazine, February 2004

“Schauberger was an untutored genius well ahead of his time. His remarkable insights and investigations into water and living energies challenge established scientific dogmas then and now. Alick Bartholomew has done an admirable job of making Schauberger's work accessible and relevant to our age without compromising its artistic integrity. Read it for pure inspiration and for concrete ideas on disciplines as diverse as bioenergetics, consciousness, earth science, hydrodynamics, thermodynamics, and many others yet to be named.” —Dr Mae-Wan Ho, biologist, author, and editor of Science in Society

PART ONE: AN ALTERNATIVE WORLD-VIEW

PART TWO: HOW THE WORLD WORKS

PART FOUR: THE LIFE OF TREES

Energizing Water
Flowform Technology and the Power of Nature

Sensitive Chaos
The Creation of Flowing Forms in Water and Air

Water
The Element of Life
OR