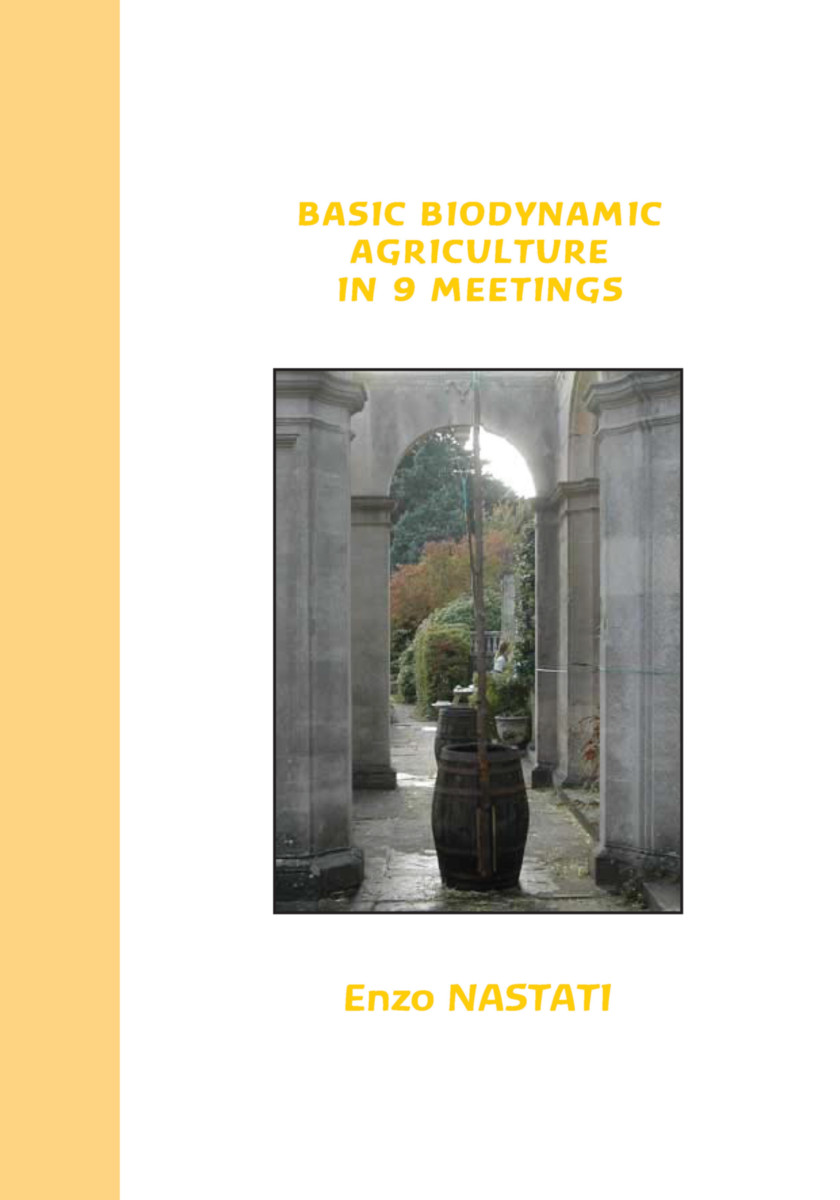 “Humanity has no other alternative before it today than either to learn again about the whole web of natural and cosmic connections, or to let both nature and humanity degenerate and die out. As in the past it is imperative that our knowledge should penetrate to the actual structure of Nature.” —Rudolf Steiner, Koberwitz, 1924

THE EARTH AS A LIVING ORGANISM: The four kingdoms of Nature, The etheric world in ancient philosophies, The formation of the Elements in the Earth, The Polarity between East and West; Europe as Centre; Central Europe and Italy, The Law of Threefoldness, Polarity of North and South, Vertical Current in the Earth, The Currents of Water as the Blood of the Earth, Agricultural vocations, Etheric routes and lines, The vocation of a city and its plan, Duties of the biodynamic movement.

THE BEING OF THE PLANT: COSMIC–EARTHLY POLARITY: The four kingdoms of Nature, the Constitution of Plants, The Etheric World, The four Elements and the four Ethers, The four Elemental Qualities; Root/Leaf/Flower/Fruit, Vegetative Forces and Nutritional Value, Fungi and Insects, The Astral body of Plants, The Gesture of the ‘I’ in the Plant, Calcium and Silica, Quantity and Quality, The Three Fundamentals of Biodynamics, The Inner and Outer Planets, The Full Moon, The Difference between Biodynamic and Organic, The Cow Dung and Silica Preparation, Clay, Carrot, Vine, The Group Egos, Forms and Processes.

PREPARATIONS FOR COMPOST AND FIELDS: Biodynamic Preparations, Chaos in the Seed, The Sowing Calendar, 502 (Yarrow), 503 (Apple Orchard), 504 (Nettle), 505 (Oak), 506 (Dandelion), 507 (Valerian), The Preparations and The Planets and Internal Organs, Different Uses of the Preparations for Compost, The Door of Warmth.

PLANT DISEASES AND THEIR REMEDIES: Pathogens Habitat, Trunk Paste, Prevention, The Animal, The Agricultural Organism and the Elemental Beings, Two Sorts of Astrality, Vital Equilibrium of the Plant, Seasonal and Local Foods, Full Moon and New Moon, Processes of Nerve and Blood, Macerations and Decoctions.

SYNTHESIS OF THE PRECEEDING CONSIDERATIONS: Sidereal Moon, Planetary Actions, Seed Balancing, The Breathing of the Earth, Illnesses and the Nursery, Blood and Nerves, Mulching and Watering, Secondary Action of the Planets and the Sowing Calendar, The Nursery, Viruses.

THE SOWING CALENDAR, PART 1: THE MOON AND THE PLANETS: Transmutations, Higher Connections of the Plants, Maria Thun’s Calendar, The Moon and the Planets, Moon, Sun and Earth, Full Moon, Hour 36, The Seed and Etheric Resonance, New Moon, Maria Thun’s Calendar, The New Seed, Elemental Beings of Nature, Elemental Beings, Good and Bad, Hybrids and Genetic Manipulation, Agriculture, The Son, 13 Holy Nights, The Night of St John, Local Seeds, Work with Seeds, The Future of Biodynamics, The Incarnation of the Idea across the Planets.

THE SOWING CALENDAR, PART 2: THE MOON AND THE ZODIAC: The Trinity, 4 zodiac impulses; differences between Earth, Moon and Zodiac; agricultural organism; sidereal moon: ascending and descending Sun; sidereal and synodic months; light and darkness; the beings of Nature; "good hands": signs and constellations; Hierarchies and Dependents of the Father and the Son; biodynamics as a path of initiation; open seeds; the synodic moon; lettuce; beets; machinery and elemental beings.

THE ESSENCE OF THE TREE AND THE ORCHARD: The Tree as Elevated Soil, Seven Layers of the Tree, Acupuncture in Plants, Functions of the Cambium, Trunk Paste, Poor Etheric, Rich Astral, The Secret of the Tree, Over Fertilization, Flowers and Insects, Frog, Poor Etheric, The Bee, Pruning, Grafting.

Enzo Nastati is the principal director of The Eureka Institute, Codroipo, Udine, Italy. He has been a biodynamic farmer for more than forty years and understands from a deep and dedicated study of Rudolf Steiner’s work that the biodynamic agricultural method was always intended to be developed and fortified to meet changing demands of time. Mr. Nastati’s work has been recognized around the world where he lectures, consults, and conducts continuing research. Spurred by his observations of extreme decrease in plant vitality immediately following the Chernobyl nuclear disaster in April 1986, he began researching and developing preparations and application techniques to further meet the demands of our time. His work addresses the difficulties presented by electromagnetic fields, radioactive pollution, industrial pollution, water quality deterioration, GMOs, and other harmful effects of modern technology.