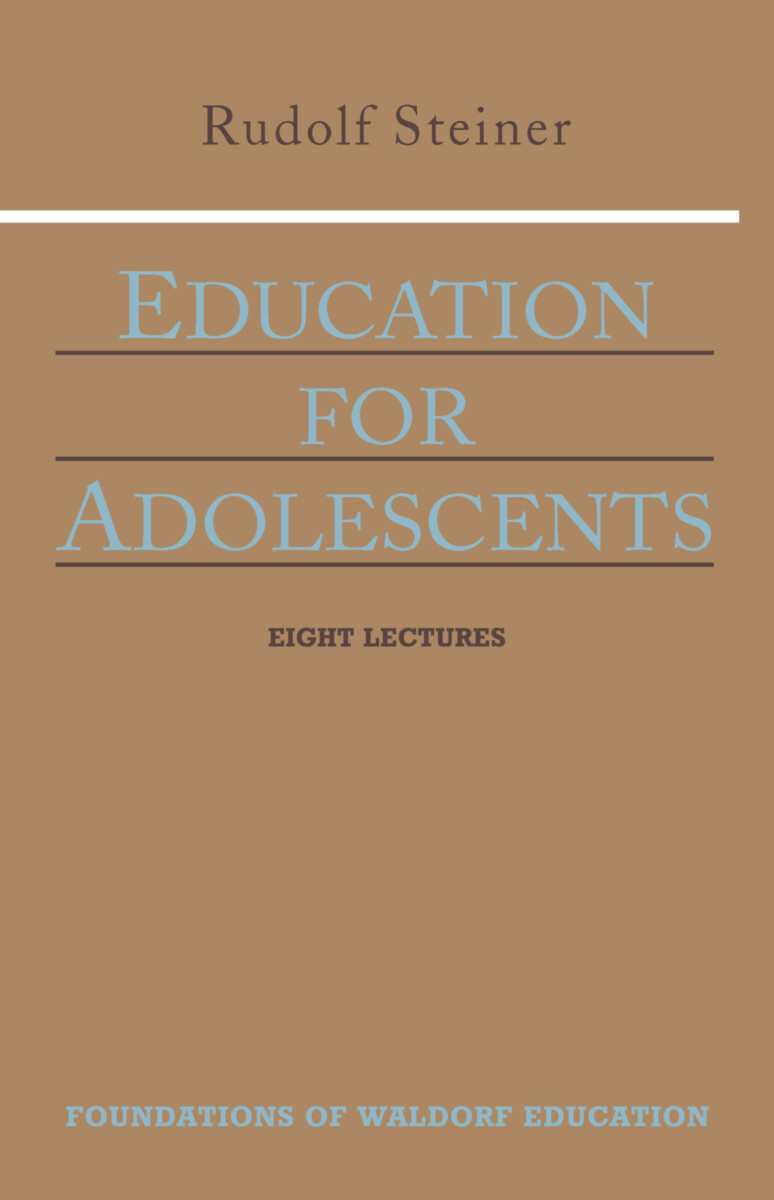 In these eight talks on education for teenaged young people, Steiner addressed the teachers of the first Waldorf school two years after it was first opened. A high school was needed, and Steiner wanted to provide a foundation for study and a guide for teachers already familiar with his approach to the human being, child development, and education based on spiritual science.

Steiner’s education affirms the being of every child within the world of spirit. This approach works within the context of the child’s gradual entry into earthly life, aided by spiritual forces, and children’s need for an education that cooperates with those forces.

Some of Steiner’s remarks may be controversial, but unbiased study will lead to an appreciation of the profound thought and wisdom behind what is presented here.

LECTURE ONE: Teaching should have a lasting effect on children. The nature of memory. Feelings, humor, expectations as aids of memory. Listening, contemplating–doing, activities. The school as an organism. Harmony of physical and spiritual life. Hygienic effect of lessons

LECTURE TWO: Mental images, judgments, conclusions—their connection to head, legs, arms, hands, and feet; their connection to the etheric body, the astral body, and the ego. Head and limbs—their relation to cosmos and earth. Heredity. Connection of the physical–corporeal to soul and spirit. “Cosmic” and “earthly” children. History lessons. Objectivity. Physical education. The teacher’s preparation.

LECTURE THREE: Adapting lessons to the children’s lives. Effects on the various constituents during waking and sleeping. Eurythmy, music, physics, history. The complementary effects of subjects. Structuring lessons to adapt to the threefold being. Practical activities and the faculty of forming judgments. The practical aspects of geography. The time element in history. By ignoring the nature of sleep, we produce automata–robots.

LECTURE FOUR: The School as organism. Connection of the physical–corporeal to soul and spirit. Physical activities–mental activities. Writing, reading, listening to stories. In mental work, the physical organism is predominantly occupied. Salt deposits. The effects of interest, boredom. Eurythmy and singing liberate the spiritual in the limbs. Children with rich and poor imagination. Education interferes in human freedom. Memorizing. Handwork.

LECTURE FIVE: Radical changes occurring during the fourteenth and fifteenth years. Inner struggle for establishing a relation to the physical. Constitutional differences between girls and boys and their manifestations in behavior. Eroticism. The experience of beauty. The strengthening of the religious–moral feelings. Different treatment for girls and boys during puberty. Shame; humor; ideals; role models. Education is to lead toward an understanding of life. Class 10 curriculum.

LECTURE SIX: Education during puberty demands the teachers’ deeper foundation and understanding of the world. Characteristic features of current educational systems. Interest in current world events a condition for educating children at this age. The youth movements. The Greeks’ relation to and understanding of the different ages. The natural sciences fail to provide a true picture of the human being and the world. The reason why we do not reach the young. The Greeks’ concepts of the four elements.

LECTURE SEVEN: Human connections between the different age groups. Ignoring the subtleties results in gaps among people. Examples of a knowledge of nature that comprehends life—in the spheres of plants, animals, human beings, and the cosmos. Spiritual–scientific penetration of feeling and sensation as bridge to an understanding of children during puberty.

LECTURE EIGHT: Inclination toward ideal at ages fourteen and fifteen. Self-chosen authority. Judgments. Protein. Our sciences and universities. Children’s imitation—the continuation of prenatal activities. Cultivation of the search for the truth. The ninth year. Development of the sense of Beauty. Love and duty. Change in the relation to authority. Concluding words.