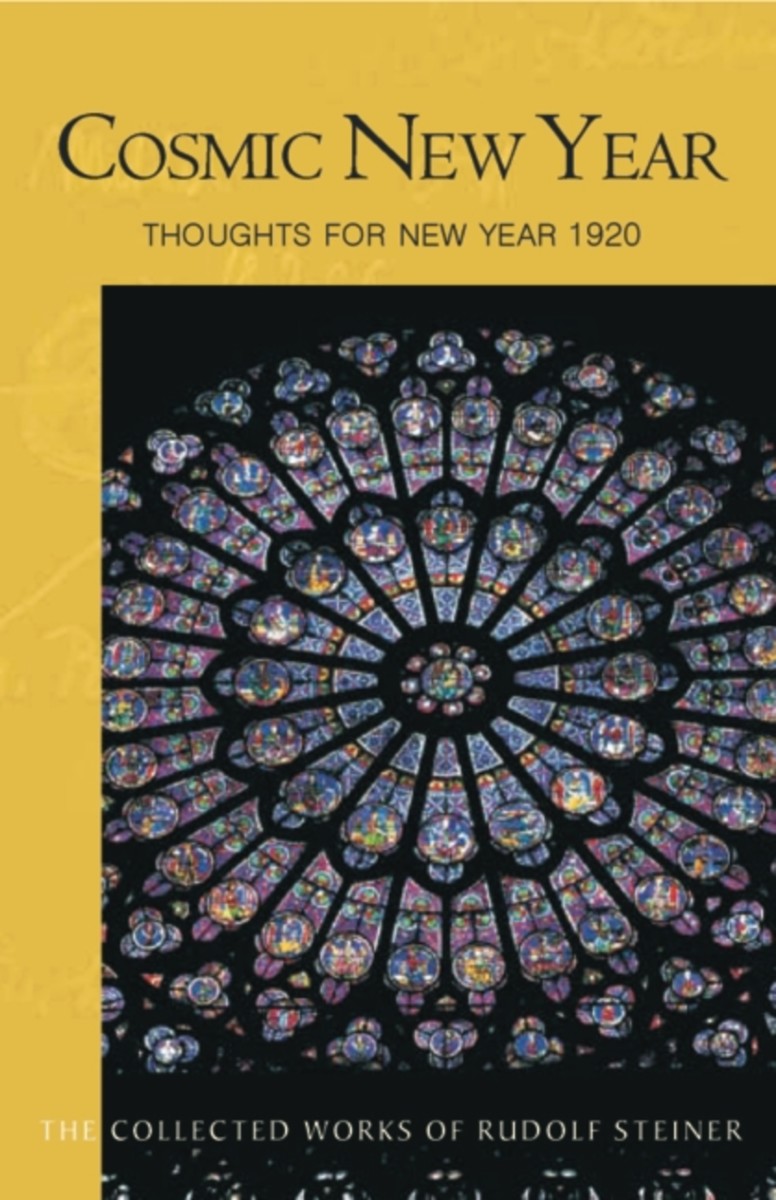 During Christmastime of 1919 to 1920, Rudolf Steiner was in Stuttgart to celebrate the end of the first semester of the first Waldorf school and participate in its Christmas festivities. During his visit, he gave not only two courses for teachers (The Light Course and The Genius of Language), but also the five lectures for Anthroposophical Society members collected in this book.

As with all of Steiner’s lectures given around the Holy Nights, these jewel-like lectures are both inspiring and sobering. The Archangel Michael is once again the “world regent.” He shows us a new path to Christ and to the spirit world, calling on us to create new relationships to spiritual realities. Yet, inertia or lack of will, materialism, and powerful opposing forces make his and our task more difficult. World War I had ended, but peace was still a distant hope. Prescient to our own moment, these stirring lectures are more relevant than ever, still inspiring a call to arms.

Cosmic New Year is a translation from the German book Weltsilvester und Neujahrsgedanken (GA 195). A previous translation was published in 1932 under the same title.

1. STUTTGART, DECEMBER 21, 1919: The three streams of cultural life: The Mysteries of The Light, of the Human Being, and of the Earth. 1) Origin in the old Eastern spiritual life. Social impact of the old initiation. The scientific path from above to below. Increasing filtration in ancient Greece to the abstraction of our time. Represented in the social sphere by aristocracy and feudalism. 2) Origin of the rights life in the Egyptian mysteries. Its development in Roman times. Legalization of Christianity in the Roman Catholic Church. Represented in social life by the bourgeoisie. 3) Origin of the economic life in the Nordic mysteries. Festivals related to the economic life. The way upward from below. Examples: Newton, Darwin, Mill, Spencer, Hume. The three streams rolled up together in the cultural chaos of today. Goethe, Wilhelm von Humboldt. The Russian revolutionaries. Opponents of Anthroposophy: Domkapitular, Ferrière.

2. STUTTGART, DECEMBER 25, 1919: A Christmas lecture. The Michaelic way to Christ. Can we still be Christians? (David Friedrich Strauss.) The anti-Christian thoughts of Tirpitz and Ludendorff. Harnack’s conception of Christ. The beginning of Michael’s regency in 1879. Michael today. The “cosmic lie” of the freedom of nations. The past incarnation of Lucifer and the future one of Ahriman. The Christian way as a balance between these two powers. The Christmas festival. The need for a new revelation.

3. STUTTGART, DECEMBER 28, 1919: The mystery of the human will. The connection between the will and processes of destruction. Effects of the will and the course of nature. Lucifer’s incarnation in ancient China. Eastern mysteries: their becoming abstract in Greek philosophy and fixed in phrases at the present time. The preparation for the incarnation of Ahriman. The erroneous interpretation of the Gospels as a means to prepare the incarnation of Ahriman.

4. STUTTGART, DECEMBER 31, 1919: The relationship of human life to the past and the future regarded as a mirroring process. Perception of the “I” as a result of the interruption of consciousness during the night time. The necessity for the new revelation. The present day as a kind of Cosmic New Year. The necessity for a new experience of Christ. Gogarten’s book Spiritual Science and Christianity. The attacks of the Jesuit Zimmermann. After the Cosmic New Year there must come a new year of the spiritual future.

5. STUTTGART, JANUARY 1, 1920: Rudolf Steiner’s early essay “The Spiritual Signature of the Present.” Fichte and Hegel. The dogma of revelation and the dogma of mere sense experience. Lenin’s social ideas. Spiritual science strives for a social order in which a balance exists between capacities and needs, i.e., between Lucifer and Ahriman. The characteristics of present East European culture (Lenin, Trotsky) with regard to the social sphere. In Middle Europe, the denial of the German spiritual life represented by Goethe and Schiller. Heinrich Deinhardt.

READ THE INTRODUCTION BY CHRISTOPHER BAMFORD