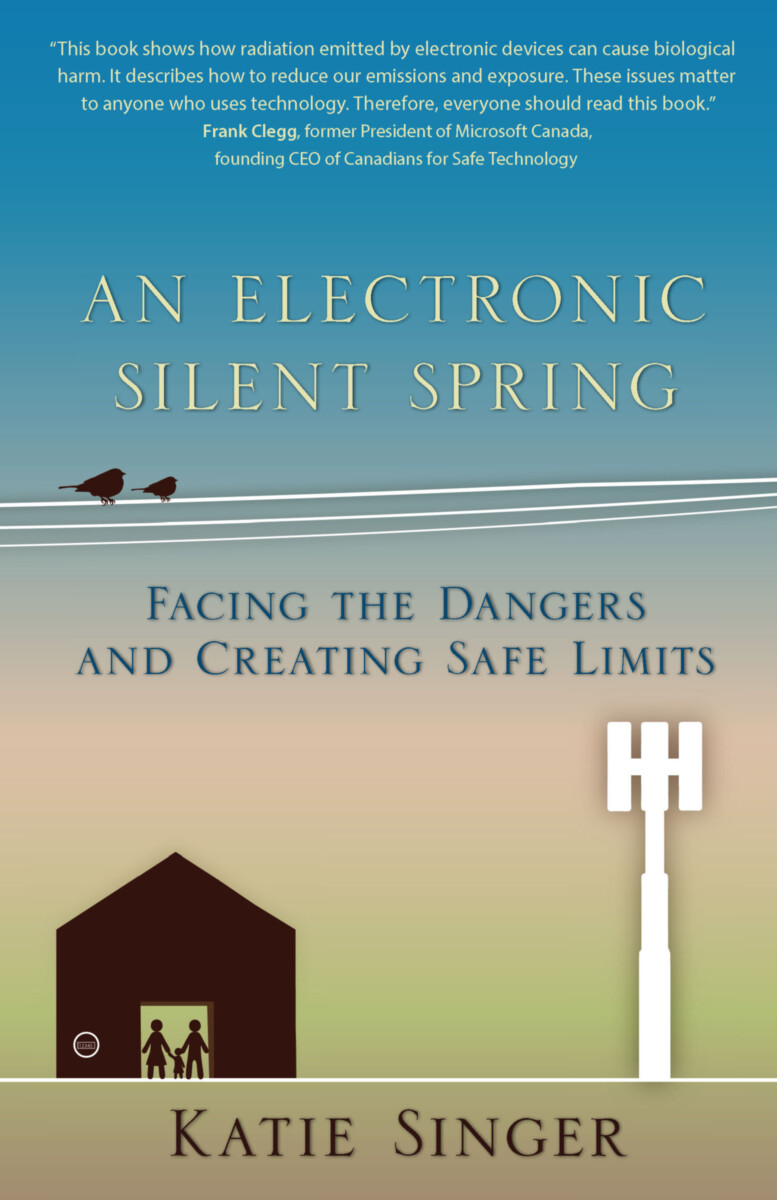 “Except for light and infrared heat, we can’t perceive any of these [radio frequency and other] energies without instruments, so most people don’t realize how drastically and abruptly we’ve changed the electromagnetic environment in just one century.” —Robert Becker, MD, author of The Body Electric: Electromagnetism and the Foundation of Life

Over millions of years, living creatures have evolved in relation to the Earth's electromagnetic energy. Now, we're surrounded by human-made frequencies that challenge our health and survival. An Electric Silent Spring reports the effects of electrification and wireless devices on people, plants, bee colonies, and frogs around the globe. It presents solutions for people who want to reduce their exposure to electromagnetic radiation.

This pioneering book is for anyone concerned about the health of the environment and the people and other creatures that inhabit it.

2. Signals emitted by metal detectors, “smart” utility meters, hybrid cars, and other common electronics can shut off a medical implant. While the FDA regulates microwave ovens (whose signals can interfere with cardiac pacemakers), no agency regulates cell phones, which operate closer to the body, with more power and at the same frequency as a microwave oven. Geophysicist, electrical engineer, and implant patient Dr. Gary Olhoeft explains the issues.

3. Dr. Martha Herbert, Harvard pediatric neurologist, and Cindy Sage, MA, coeditor of the BioInitiative Report, and others explain why exposing children to Wi-Fi may lead to autism. The American Academy of Pediatrics warns pregnant women and children not to use cell phones.

4. Federal regulations protect the engineering needs of electronic devices and telecom companies. Federal law prohibits local officials from refusing installation of a cell tower based on health or environmental concerns. The book explains federal policies, which do not recognize that EMR can harm health.

5. Underwriters Lloyds of London and A.M. Best advise companies not to insure against damages to health caused by wireless devices. This book presents the peer-reviewed studies underlying analysts’ concerns.

“This is a ‘Stop, Look, and Listen’ book. Katie Singer has performed a great public service by assembling compelling scientific studies and personal experiences about the effects of exposure to radiation from man-made electricity and wireless devices on birds, wildlife, and human health. Like Rachel Carson, Singer’s warnings will not be popular with power company and telecommunications executives, investors, and lobbyists, who can be counted on to attempt to undermine her work. However, her findings deserve thoughtful analysis and action by concerned citizens and elected officials and must not be swept under the rug.”
—Whitney North Seymour, Jr., former New York State Senator, United States Attorney, and co-founder of the Natural Resources Defense Council

“An Electric Silent Spring illuminates how human-made electricity and wireless devices impact bee colonies, birds, cows and human cell structure. It describes actions we can each take to reduce and mitigate the harm caused by the electromagnetic radiation emitted by mobile devices. This is an important and thoughtful book for every person concerned about the environment and human health.”
—Kenny Ausubel, Co-CEO and Founder, Bioneers

“A must-read for those of us rushing heedlessly into the wireless age. Katie Singer describes the dangers of EMFs in a way that goes beyond the science with moving personal stories.”
—Sally Fallon Morell, President, The Weston A. Price Foundation, and author of Nourishing Traditions

“With brilliant clarity, An Electric Silent Spring shows how radiation emitted by our beloved electronic devices can cause biological harm. It describes the steps that individuals, manufacturers and policy makers can take to reduce our emissions and exposure. Because these issues matter to every parent, teacher and technology user, everyone needs to read this book.”
—Frank Clegg, former President of Microsoft Canada, founding CEO of Canadians for Safe Technology.

1. Ginger Farver: Give Me a Megaphone
2. Veronica Ciandre: My Life Six Feet under Ten Cellular Antennas
3. Wildlife Health and Radio-frequencies
4. Electricity, Magnetics, Electronics, Biology, and the Law
5. What’s New under Heaven?
6. Health Effects of Exposure to Magnetic and RF Fields
7. Other Dangers from Wireless Devices
8. Rules and Regulations that Frame Us
9. Slingshots at Goliath
10. Living with Ourselves and Other People in this Virtual Season
11. Solutions
12. Closing Questions

KATIE SINGER presented her concerns about the Internet's footprint at the United Nations 2018 Forums on Science, Technology and Innovation, and Sustainable Development. A medical journalist, her books include An Electronic Silent Spring (2014, also available in Korean); Honoring Our Cycles (2006); The Garden of Fertility (2004); and The Wholeness of a Broken Heart (1999). A consultant for the Electromagnetic Policy Institute, Katie speaks internationally.

Digital Inferno
Using Technology Consciously in Your Life and Work: 101 Ways to Survive and Thrive in a Hyperconnected World

The Struggle for a Human Future
5G, Augmented Reality, and the Internet of Things
OR