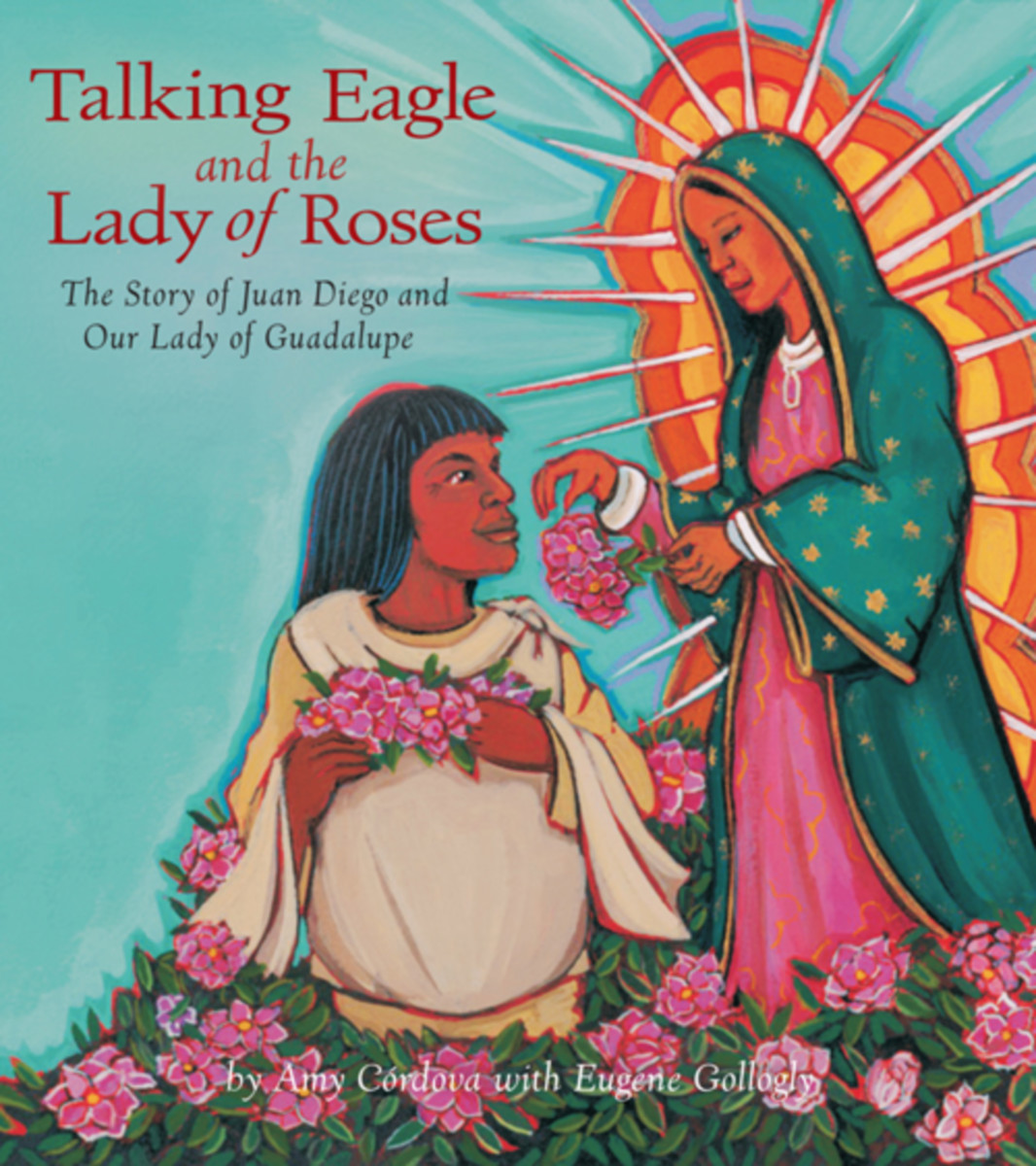 Talking Eagle and the Lady of Roses

The Story of Juan Diego and Our Lady of Guadalupe

“Long ago, in a small village in old Mexico, a baby boy was born. A child of the Great Eagle Clan, he was named Talking Eagle, Cuahuhtitlan, in the language of his people, the Nahuas. He was a kind boy and a dreamer of visions, and like the eagle, he could rise above and see things that others could not. He loved to wander alone among the hills, and was always the first to greet the dawn, to find the newborn fawn in its secret resting place and gather the wild and glorious roses of Castilla that dotted the hillsides near his village.

“Many years before, from the faraway land of Spain, men in long robes, who called themselves Brothers of St. Francis, came to the land of the Nahuas. They brought with them the lovely roses of Castilla, and they told wondrous stories of the Son of the Great Creator, the one they called the Lamb. The holy stories etched deep and vivid pictures in Talking Eagle’s mind. Talking Eagle became a faithful follower, and received a new name that would mark his place in the flock of the Lamb.... Talking Eagle became Juan Diego...”

This is the traditional story, told simply and elegantly, of how Juan Diego meets the beautiful Lady on a windswept hilltop in December and carries her message to the disbelieving bishop. The Lady fills Juan’s cloak with full-blooming roses and impresses her image on its fibers as a sign for the bishop to fulfill her request of building a house of prayers.

This story tells of how, over many years, countless hands built the great church dedicated to the Lady of Roses, Nuestra Senora Guadalupe on the hill of Tepeyac. And it stands there still, as a center of prayer, healing, and hope for all of Our Lady’s precious children of the Earth.

Everyone will enjoy the story of Talking Eagle and the Lady of Roses and the wild and glorious illustrations of award-winning, Taos, New Mexico, artist Amy Cordova.

Also included is an informative afterword by Gene Gollogly.

“Talking Eagle, an Aztec peasant who had converted to Christianity and been renamed Juan Diego, is approached by Mother Mary and asked to build a church on the top of Tepeyac hill. When Juan takes the request to Bishop Zumárraga, he is denied until he can bring proof. Mary provides roses during the middle of winter, and when they are brought to the bishop, the image of Mother Mary also appears imprinted on Juan's "tilma"or cloak. With that proof, a church is built on the site. Readers familiar with the story through oral renditions will enjoy this religious tale as it unfolds, and details help the story flow. The dark-hued folk-art drawings depict Juan and the Lady of Roses with Mexican flare. End pages provide more information regarding the history, Lady Guadalupe, Juan's "tilma" and current celebrations. Children who already know the story will enjoy the depth and the rich art provided here; those unfamiliar with the legend should also appreciate it.” —School Library Journal

“Jewel-toned, folk-art-style illustrations illuminate this tale of the first indigenous saint in the Americas. Authentically and lovingly told, this version of the familiar story of Juan Diego and the Lady of Guadalupe is dramatic and bold, affirming the worth and celebrating the perseverance of the poor and downtrodden.” —Kirkus

“This tender story tells of the appearance of Our Lady of Guadalupe to an indigenous healer, Talking Eagle, who had converted to Catholicism, becoming Juan Diego. When Mary instructs Juan Diego to tell the bishop to build a "house of prayers" on the hill upon which she appears, he is unable to persuade the bishop until Mary produces blooming roses in December. Rendered in dazzling jewel tones, Córdova's drawings possess a quiet radiance; while the story skims over the history of Spain's colonization of Mexico, Gollogly's afterword notes that ‘conversion... was often enforced at the point of a sword.’” —Publishers Weekly

Amy Córdova is an artist and storyteller whose art reflects soul and spirit. She has been recognized for her work as an illustrator of children’s books, receiving the Wisconsin Library Award for Namaste!, and being named honor winner of the American Library Association’s Pura Belpré Award 2009 and 2010. Amy lives in Taos, New Mexico.

Stories of the Saints
A Collection for Children

Where on Earth Is Heaven?
OR