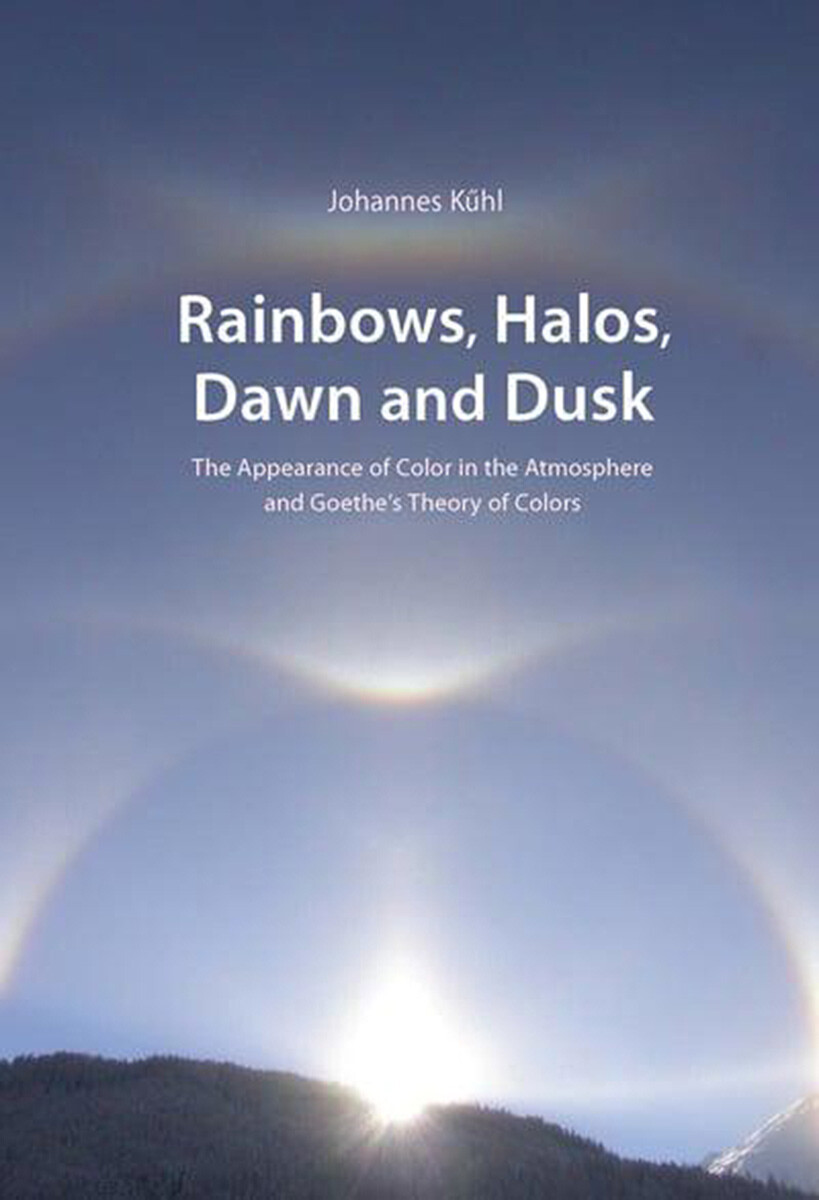 This book explores the captivating colors that appear in Earth’s atmosphere—coronas, glories, halos, rainbows, dawn, and dusk. It invites the reader to observe these ephemeral appearances with renewed attention and understanding. In addition, it introduces us to little-known key experiences in Goethe’s life that were intimately related to his scientific pursuits and his deep experience of color.

Following the holistic phenomenological method developed by Goethe in his theory of colors, this book bridges the expanse between human experience and the physics of atmospheric colors. The unfolding descriptions take on an artistic quality, through which our experience of the color phenomena is deepened as our scientific insight becomes enriched.

This book will prove helpful to scientists looking for a fresh approach to optics or an introduction to Goethe’s phenomenological science; to teachers looking for new ways to present optics lessons; and to anyone who loves colors and wishes to deepen their relationship to them.

This book explores the captivating colors that appear in the atmosphere of the earth: coronas, glories, halos, rainbows, dawn and dusk. It invites the reader to observe these ephemeral appearances with renewed attention and understanding. In addition, it introduces us to little-known key events in Goethe’s life that were intimately related to his scientific pursuits and his deep experience of color.

The text moves fluently between natural observations and suggested experiments while the photographs encapsulate the best examples of these. We can constantly relate our own experiences in nature to what is exemplified here. Anything not immediately familiar in the discussion is compensated for by the quality of the pictures and the memories of one's own atmospheric and color impressions.

The book’s aim is to be a bridge, or many-colored bow, spanning the physics of atmospheric color and a spiritual approach to them. I believe nature observers, thinkers, and scientists will all be rewarded by the multi-faceted approach used here.

Gradually, over the first five chapters, a range of phenomena is described and arranged to give a complete survey of what Goethe called the physical colors, the colors which arise from colorless conditions. The ordering and investigation of the phenomena in no way diminishes one's expectation and anticipation for further experiences. On the contrary, the explicit wish is that it may be possible to “touch your eyes with the magic wand of knowing what to see”.

All types of physical color, indeed all types of color formation known to physics, occur in the transparent life-supporting layer between the illuminated earth and the darkness of space. The concept ‘turbidity’—possibly unfamiliar to some audiences—is used here to define the fine and varied material elements that bring about the interaction of light and dark, and thus the subtle mediating role of the atmosphere is made clear. It is the kind of understanding that is both intellectually satisfying and yet leaves us free to experience the phenomena on all levels of our being.

So there follows naturally a chapter on the “sensory-moral effects” of atmospheric colors, where the fullness of human experience is included in the sequential arrangement that has been presented. From coronas to dawn and dusk the range of experiences runs parallel to a process of integration towards wholeness: knowledge and experience flow together: “In composite situations with color situations like the rainbow, or dawn and dusk, the human being is integrated, part of the whole.”  At special moments we can even think that Nature builds her own temple around us, within us, and within the world all at once.

The book continues with a very readable overview of Goethe’s color theory. Important references and generous acknowledgements are made to Goethe scholars who sought to justify and uphold the scientific character of Goethe’s method. A bold and clear conclusion is arrived at: the process for color appearance as described in Goethe’s theory of colors is symbolic of the process of gaining insight—the appearance of truth in the world through human thinking.

In this context, we can consider that the translation of this book into English has an extra cultural significance. Only one third of Goethe’s color theory was ever published in English. The translators of the Didactic part decided, back in 1837, not to publish the Polemical and Historical parts of the work. Goethe’s sometimes vehement criticism of Newton’s color theory was judged irrelevant for a British audience!

But the book invites us to consider that it was Goethe’s urge to defend human nature that made him “so astonishingly polemical about conventional Newtonian theory”. For Goethe the whole issue of the theory of color was inextricably bound up with a profound and fundamental understanding of the nature of human insight and its appearance in the world.

Johannes Kühltakes a more conciliatory approach showing that both conventional physics and a Goethean approach can complement each other’s standpoint: “From each perspective one can learn about the other’s point of view. There is something to be gained from each, to the benefit of both.”

Following the notable crescendo of the previous chapters, a refreshing narrative is then woven together from Goethe’s letters and poems, describing the place of the theory of colors in Goethe's biography. Impressed by Goethe’s boldest statements and his positive confidence, many of us have long felt certain that some holistic experience must have occurred within him. Here it has been located and imaginatively reconstructed.  Like all true experiences of this kind, it was largely inexpressible by Goethe, except perhaps to his most intimate friends, but it later came to expression in poetry. That such an experience was an impulse for the beginning of Goethe’s scientific studies is a wonderful discovery.

There is a wonderful concluding chapter called “The Earth’s Atmosphere as the Natural Abode of Colour,” which brings together the book’s achievement, and invites us to consider the meaning and mystery of our situation as color beholders.

After this, Chapter 10 is called an appendix as it contains something for scientific specialists, rather than simply for the person who loves color. There are indications for future research and references to new developments in color experiments which have already become fruitful in the educational sphere. In particular, the symmetry of both the methods of Goethe and Newton, and of color itself, can be rendered through making traditional color experiments more complete by producing both the light and dark spectra simultaneously for example in prism experiments and with color mixing. I am sure that Goethe would have smiled to see these technical extensions and illustrations of his work.

The poem “Dedication” rounds off the book, in a fine 1851 translation. Perhaps our understanding of this beautiful piece of writing has been widened through knowing its biographical context. The feeling is that we have come closer to Goethe, even as we appreciate the vista into the future inspired by the new relationship to Nature which he pioneered.

I found this book to be a useful handbook for accompanying ongoing participation in the special events of atmospheric color appearance, a stimulus for deepening a contemplative approach to these experiences, and indeed part of that profound work towards wholeness in science.

1. On Seeing
2. Coronas and Glories: Order in Diffraction Phenomena
3. Halos And Rainbows: On the Prismatic Colors
4. The Blue Sky and the Setting Sun: On Colors of Twilight and Colors of Turbidity
5. An Overview of Atmospheric Colors
6. On the “Sensory-Moral Effects” of Atmospheric Color Phenomena
7. Goethe’s Theory of Colors
8. The Theory of Colors in Goethe’s Biography
9. The Earth's Atmosphere as the Natural Abode of Color
10. Appendix: Aspects from the Perspective of Mathematical Physics

Johannes Kühl, physicist and leader of the Science Section at the Goetheanum, was born in 1953 in Hamburg, Germany. He studied physics in Hamburg and Göttingen, finishing with research in fluid dynamics at the Max Plank Institute. After a year of research at the Science Section at the Goetheanum, he taught physics, chemistry and mathematics at the original Waldorf School in Stuttgart Uhlandshöhe. Since 1996, he has been the leader of the Science Section at the Goetheanum and a member of the collegium for the School of Spiritual Science. Since high school, core areas of interest for him have been modern physics and optics, as well as Goethean science. He has given numerous lectures and seminars on these themes and finally put some of his thoughts into his book, Rainbows, Halos, Dawn and Dusk.