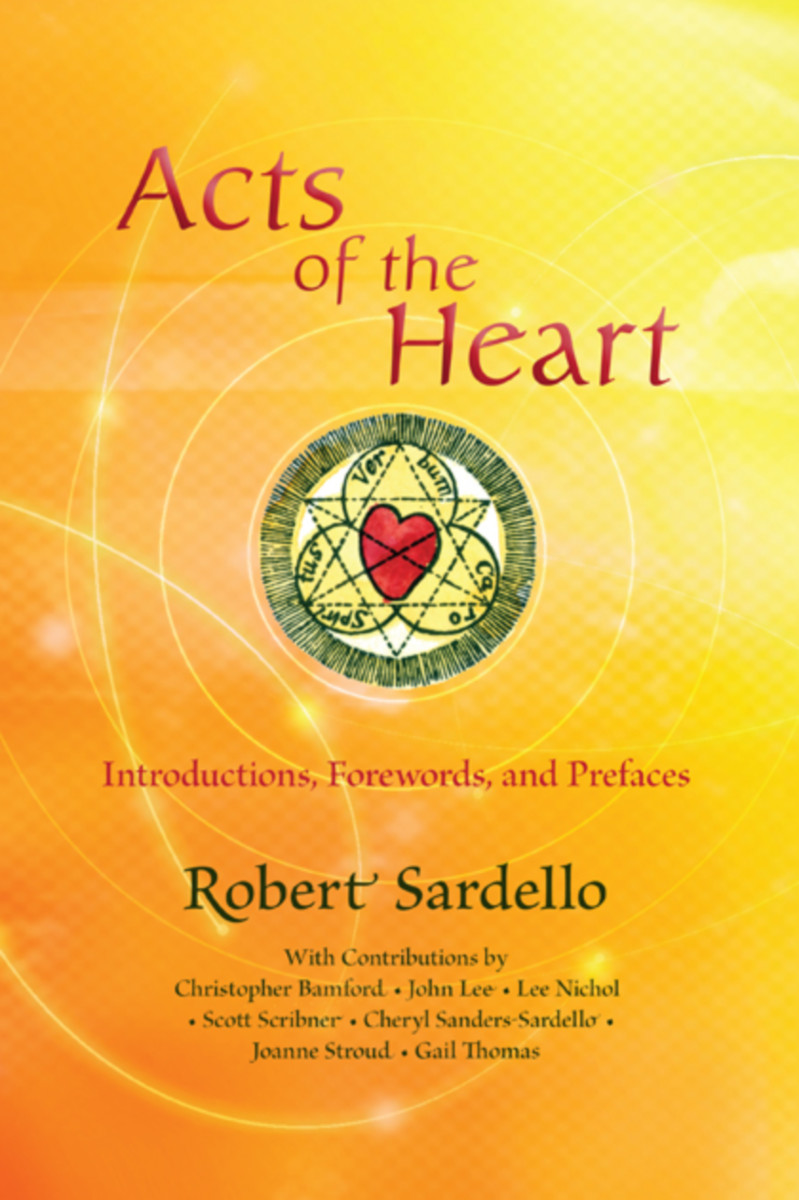 “Reading through this volume is to be taken on a journey. It is to walk with Robert Sardello on his journey as he pushes forward toward new realities. In a sense, each step is not so easy. The thinking often appears dense, the ideas often new and therefore disconcerting. But each individual piece, as the whole, is bathed in an aura—in a way, we may say it is bathed in soul; in love, in generosity, and friendship. Attending to these, we find the ideas and the new possibilities begin to make sense. We are moved to change our lives.” — Christopher Bamford (from his introduction)

In these introductions, Robert Sardello introduces us to many people we may not otherwise have met and introduces us to many ways of being and thinking, which we didn’t know before. The range of those we meet in these pages is staggering. At the same time, there is a sweet harmony and ever-unfolding deepening of a single theme. Miraculously, it pervades and shapes the entire sequence of those whom he presents, even though he often wrote in response to a request, and not initially on his own initiative.

Robert writes of matters with which he has made a deep friendship, and out of that friendship he has received and participated in a communion of ideas. He is able to do this because he has entered the aspiration of those he is introducing at the deepest level, making their insights his own and deepening them in his own way.

An introduction conveys a particular soul capacity. For Robert Sardello, “soul capacities” are of the essence of what he calls Spiritual Psychology. Together with the worlds and beings to which they correspond, it is such capacities that make us human and enable us to fulfill our human tasks.

Reading these introductions is an astonishing experience. Within their short, individual compasses, they allow us to participate in Robert’s own journey: to catch, as it were, the bird in flight and fly with it. That is, they map his journey—at least, that portion of it that began to unfold as his destiny began to crystallize.

“Robert Sardello’s insights navigate many hazardous abstractions, from the so-called New Age through the perennial philosophies. With Sophia as his muse, the ‘current from the future’ calls him, carrying its many imaginations as energy, the always-immediate now, and the truly new. Across these authors’ writings, his visionary perspective deepens in dialogue with the different works as authored beings. For writings possess their own spirit, or how otherwise do they engender a unique spirit when reborn within our own imagination?” — Scott R. Scribner (from his introduction)

1. Educating with Soul
2. Dragonflies: Studies in Imaginal Psychology
3. Stirrings of Culture
4. Freud, Jung, and Spiritual Psychology
5. Jung and Steiner: The Birth of a New Psychology
6. The Angels
7. The Speech of the Grail
8. Sing Me the Creation
9. Anthroposophy (A Fragment)
10. So that You May Be One: From the Visions of Joa Bolendas
11. Seeking Spirit Vision: Essays on Developing Imagination
12. Conversation Amoureuse
13. A Psychology of Body, Soul, and Spirit
14. Give Us This Day: The Story of Prayer
15. The Book of Stones: Who They Are and What They Teach
16. Cooking for the Love of the World
17. The Unknown Hieronymus Bosch
18. An Unknown Destiny: Terror, Psychotherapy and Modern Initiation
19. I Connecting: The Soul’s Quest
20. Healing Pandora: The Restoration of Hope and Abundance
21. Stones of the New Consciousness: An Interstitial Word by Lee Nichol
22. Strange Loops and Gestures of Creation
23. Healing Ourselves from Medicine: How Anthroposophy Can Save Your Life
24. The Mysterious Story of X7

Coda: Love and the World
1. Ways of the Heart: Essays toward an Imaginal Psychology
2. Green Man, Earth Angel: The Prophetic Tradition and the Battle for the Soul of the World

Robert Sardello, PhD, is cofounder (with Cheryl Sanders-Sardello, PhD, in 1992) of the School of Spiritual Psychology. At the University of Dallas, he served as chair of the Department of Psychology, head of the Institute of Philosophic Studies, and graduate dean. He is also cofounder and a faculty member of the Dallas Institute of Humanities and Culture, as well as author of more than 200 articles in scholarly journals and cultural publications, and is a former faculty member of the Chalice of Repose Project in Missoula, Montana. Having developed spiritual psychology based in archetypal psychology, phenomenology, and the spiritual science of Rudolf Steiner from more than thirty-five years of research in this discipline, as well as holding positions in two universities, Dr. Sardello is now an independent teacher and scholar, teaching throughout the US, Canada, and the UK, as well as the Czech Republic, Philippines, and Australia. He is a consultant to many educational and cultural institutions and a dissertation adviser at numerous academic institutions. He is author of several books, including Facing the World with Soul (2003) and Love and the World (2001).