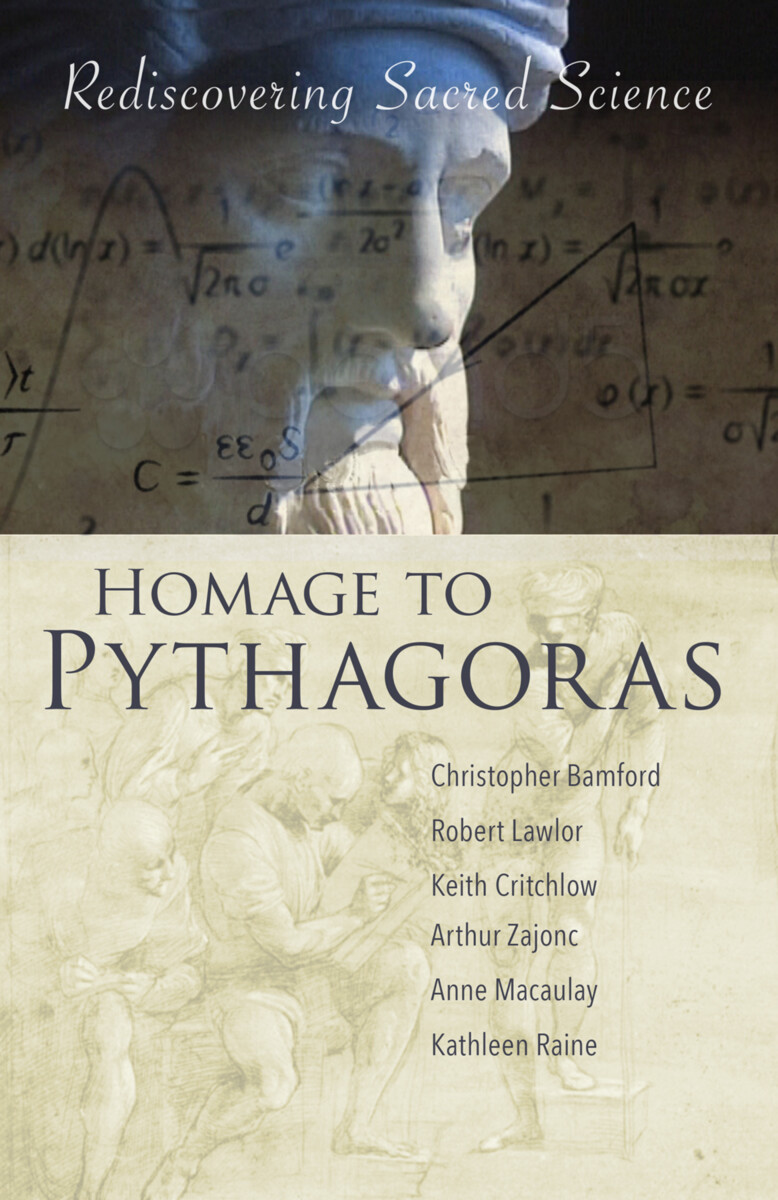 “All such disciplines, theories, and scientific investigations as truly invigorate the eye of the soul, and purify the intellect from blindness introduced by studies of a different kind, so as to enable it to perceive the true principles and causes of the universe, were unfolded by Pythagoras to the Greeks.” — Iamblichus, Life of Pythagoras

Homage to Pythagoras collects essential writings by authors at the leading edge of the sacred sciences today. Each chapter—scholarly homages to the Pythagorean perspective—confirms the continuing interest in Pythagoras’ philosophy as a living reality. These authors provide a major addition to the field of Pythagorean studies and traditional mathematics.

“Some of the finest recent articles on Sacred Mathematics in the Pythagorean and Platonic traditions, which are still as vital and important as ever.”
—Ralph Abraham, Chaos, Gaia, Eros

“If they ever put together a new Library of Alexandria, Homage to Pythagoras should be required reading.”
—John Anthony West, The Serpent in the Sky: The High Wisdom of Ancient Egypt

“With its testimony to number and pattern at the heart of nature and of the arts, the Pythagorean tradition will always be a guiding light to Western culture.”
—Joscelyn Godwin, author of The Golden Thread: The Ageless Wisdom of the Western Mystery Traditions

“These essays, at once scholarly and sympathetic to the Pythagorean perspective, are a veritable homage to Pythagoras and themselves proof of keen contemporary interest in his philosophy as a living reality. The quality of studies assembled here is uniformly high, making Homage to Pythagoras a major addition to the field of Pythagorean studies and traditional mathematics.”
—Seyyed Hossein Nasr, author of The Quest and Qalandar: Experiences of Sufism

“Homage to Pythagoras not only throws light on Pythagorean science and symbolism in the ancient worlds, but demonstrates the value of the Pythagorean approach today.”
—David Fideler, editor, The Pythagorean Sourcebook and Library

Kathleen Raine (1908–2003) graduated from Cambridge University in 1929. She became one of English literature's most remarkable twentyth-century practitioners. Although she considered herself primarily a poet, she was also a prolific writer of prose, an astute critic, and a distinguished scholar. Her poems and essays assert that true poetry is an expression of the spirit, the unfolding of a reality often hidden by the material appearance of things. Raine wrote a three-part autobiography (1973-1977), founded the magazine Temenos in 1981 to articulate her views, and in 1990 established the Temenos Academy of Integral Studies, a teaching academy that stressed a multistranded universalist philosophy. A professor at Cambridge and the author of a number of scholarly books, she was an expert on Coleridge, Blake, and Yeats.

Arthur Zajonc, Ph.D., is the Andrew Mellon professor of physics and interdisciplinary studies at Amherst College and is currently the director of the Academic Program of the Center for Contemplative Mind, an organization of 1500 academics supporting the appropriate inclusion of contemplative practice in higher education. Dr. Zajonc is the former General Secretary of the Anthroposophical Society in America, a cofounder of the Kira Institute, past President of the Lindisfarne Association, and a senior program director at the Fetzer Institute. He has served as scientific coordinator and editor for several dialogues with the Dalai Lama: The New Physics and Cosmology, held in 1997 and published in 2004, and “The Nature of Matter, the Nature of Life” (2002, unpublished). He was also moderator for the 2003 MIT dialogue, published as The Dalai Lama at MIT (2006). Dr. Zajonc is the authorCatching the Light (1993, 1995), coauthor of The Quantum Challenge (2nd ed. 2005), and coeditor of Goethe's Way of Science (1998).

Anne Macaulay (1921–1998) lived in Scotland where, for many years, she studied the origins of the alphabet, the history of the guitar, the figure of Apollo, and other mysteries surrounding Pythagoreanism. She settled in Balerno near Edinburgh and traveled widely, surveying megalithic sites around the world. In 1994, she was awarded an Honorary Fellowship by the University of Edinburgh. Mrs. Macaulay lectured at RILKO (Research into Lost Knowledge Orga­nization) and was a trustee of the Salisbury Center in Edinburgh.

The Harmony of the Human Body
Musical Principles in Human Physiology