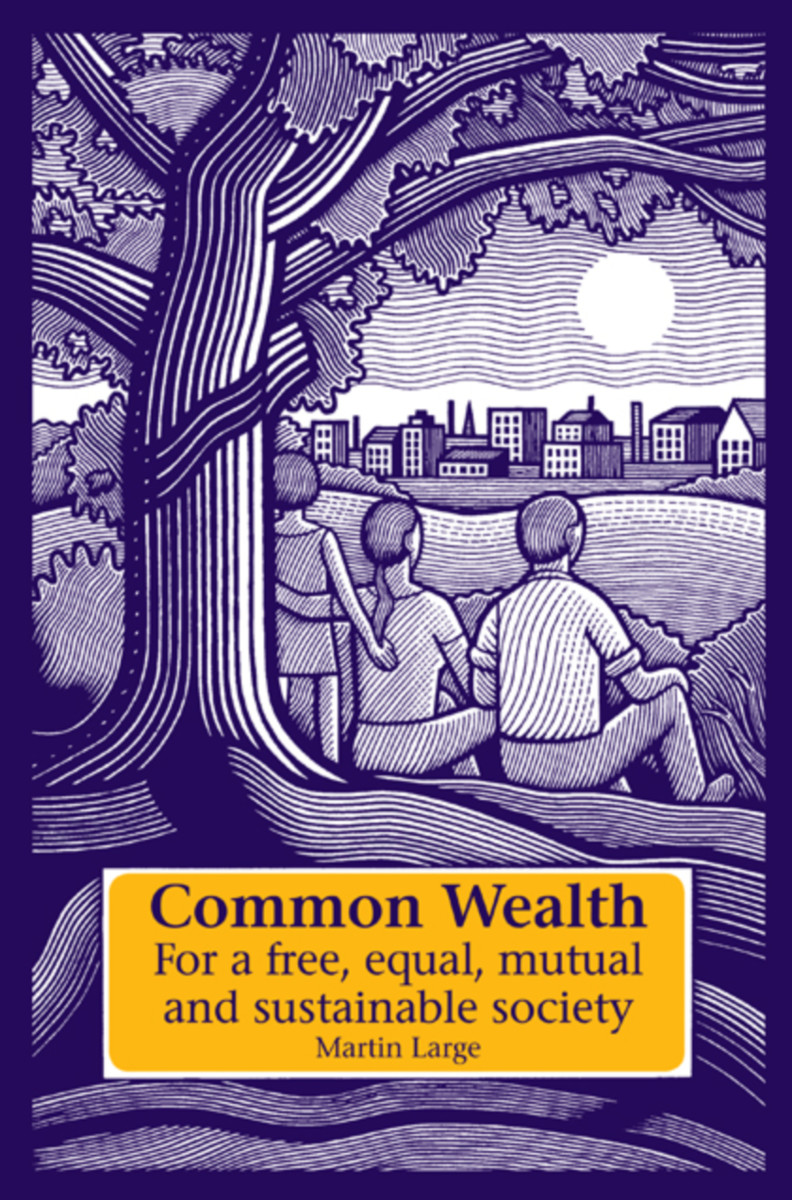 For a Free, Equal, Mutual, and Sustainable Society

What social future do we want, and how do we get there? Common Wealth analyzes how the market has taken over the state and public services, while education and health have become "industries" and profit-making businesses. Toxic, neoliberal capitalism was unleashed during the 1980s and 1990s, only to crash in the worldwide financial melt-down beginnning in 2007 and followed by public bail-outs of financial institutions.

Common Wealth proposes an alternative: a tripolar model of society, made up of government, civil society, and business, all of which work in cooperation to build a freer, more equitable, and sustainable society. The author describes ways of building common wealth, such as transforming capitalism for individual initiative and public benefit.

Some books are written with a persuasive truth that is not derived from extravagant language or vast assemblages of data. They have an authority about them that is compelling. This is true whether they are novels, biographies or non-fiction.

Hemingway's war novels have this quality. He was a war correspondent. Russell Ackoff and W. Edwards Deming were both change agents in the economic realm: Ackoff in Baltimore and Deming in Japan. Their writing, as difficult as it sometimes is, reflects that. Bernard Lievegoed started a number of institutes in the cultural and economic realms, and his writing on organisation development and change, although esoteric, has a veracity that is compelling.

So, too, with Martin Large: Common Wealth is a book written out of the experience of a social activist, who carries the bruises caused by local and national politics, and who understands the major disappointments and minor triumphs of everyday people trying to help their communities take the next, right, step in their development. This alone would make it sufficient for a most interesting read. But, Martin Large goes further—and this is what makes it a great book. He underpins his observations with good theory. As Dr Deming used to say: “No knowledge without theory”. Martin Large provides knowledge, lots and lots of it, by grounding his writing in the theory of Steiner's Threefold Social Order. He achieves two things by so doing. First, he introduces the reader to threefolding in a most succinct and convincing way. (The connection to David Korten early in the book adds to the credibility of the model.) Second, he uses threefolding to explain some of the current mixed-up thinking about society, and then to point the way forward.The structure of the book is helpful and intellectually consistent. Like threefolding, it is a book of threes: the structure of a concerto, if you will. There are three Parts. The first Part introduces the three key themes. At times, like the soloist contending with the orchestra, the style is to challenge the reader to think more deeply, and then, like the two parts playing in concert, it invites the reader to become part of the solution. This approach is consistent throughout.The second Part unfolds the tri-partite nature of society, exploring the roles that business, politics and culture play, for better or worse, in the development of society.

The third Part, like the final movement any satisfactory concerto, draws the themes together in a resolution which challenges us to think and behave as community (what South Africans call ubuntu). The examples from Stroud that have peppered the book provide a real encouragement to take this seriously.

Since the book follows the concerto pattern of thematic introduction, exploration and resolution in each of the three sections, and in the chapters, I shall limit my descriptions of the chapters to the first section only.

The first Part begins with the chapter: What Social Future Do we Want?, which explains the failure of the current political paradigm and some its dreadful consequences, and then moves into how we can begin to change the current dysfunctional system. There is an important balance here. Unlike Naomi Klein, who also writes compellingly on the travails of capitalism, but leaves one frustrated; here you are rescued by the author's advice—almost in the same breath—on what to do about it.

The second chapter, Remaking Society, expands on this rescue effort with mini-case studies and stirring examples from all over the globe, including the author's own activist experiences in his home town, Stroud—which becomes a recurring theme.The third chapter, TriPolar Society, introduces the theory of threefolding which is animated with examples, mainly from civic society. The author also uses a form of an organic analogy, the human body, again explored in three parts, to explain societal working that is most useful in understanding our own experience of living in society. At this point, one is well prepared to read on for the analysis and resolution in the remaining two sections of the book.

The rest of the book continues in this most readable way. My only small criticism is that I would have welcomed more micro-economic theory and examples. The two chapters on capitalism were riveting reading for me, a businessman and business academic; but I missed a theory of the firm. A quote from Steiner's Oxford lectures, giving the picture of transforming nature into products of economic value, transacted within a relationship of cooperation and love, would have been appropriate here - would Dan Jones' work on Lean manufacturing. Most of all, Deming's system thinking would have best informed the description of the economic realm, especially underpinning the references to Toyota. All three of these theories begin with the producer addressing the real needs of customers, and shouldering the responsibility of providing real value. I find that people in the cultural realm have no real picture of how a business should actually work, and therefore are not in a position properly to engage with businesses.

However, that is a small quibble, because looking at all these activities through the lens of civil society (which is what Common Wealth does so well) has re-positioned my own thinking. I am now much more able to pay regard to what really is the whole system, and thus to the implications of all our economic activities.

Finally, having talked about the style and the intellectual consistency, I must mention the two aspects of the writing that struck at my heart. The first is something I experienced most vividly in chapter 11, Freeing Education. There is an almost palpable controlled fury at the utter stupidity of the educational policy-makers, and at their arrogance (typified by Ed Balls). One feels that the damage that results from their distorted model of what a young human being is, and their refusal to entertain any of the compelling evidence of the wrong-headedness of their policies, must have made Martin Large want to bang his head against the wall. And yet he does not—which brings me to the second aspect of his writing. His faith in people and his belief that persevering in “doing the good” will eventually bring about the good runs like a golden thread throughout the whole book. This, with all its practical wisdom, makes it an uplifting read and a lever for change.