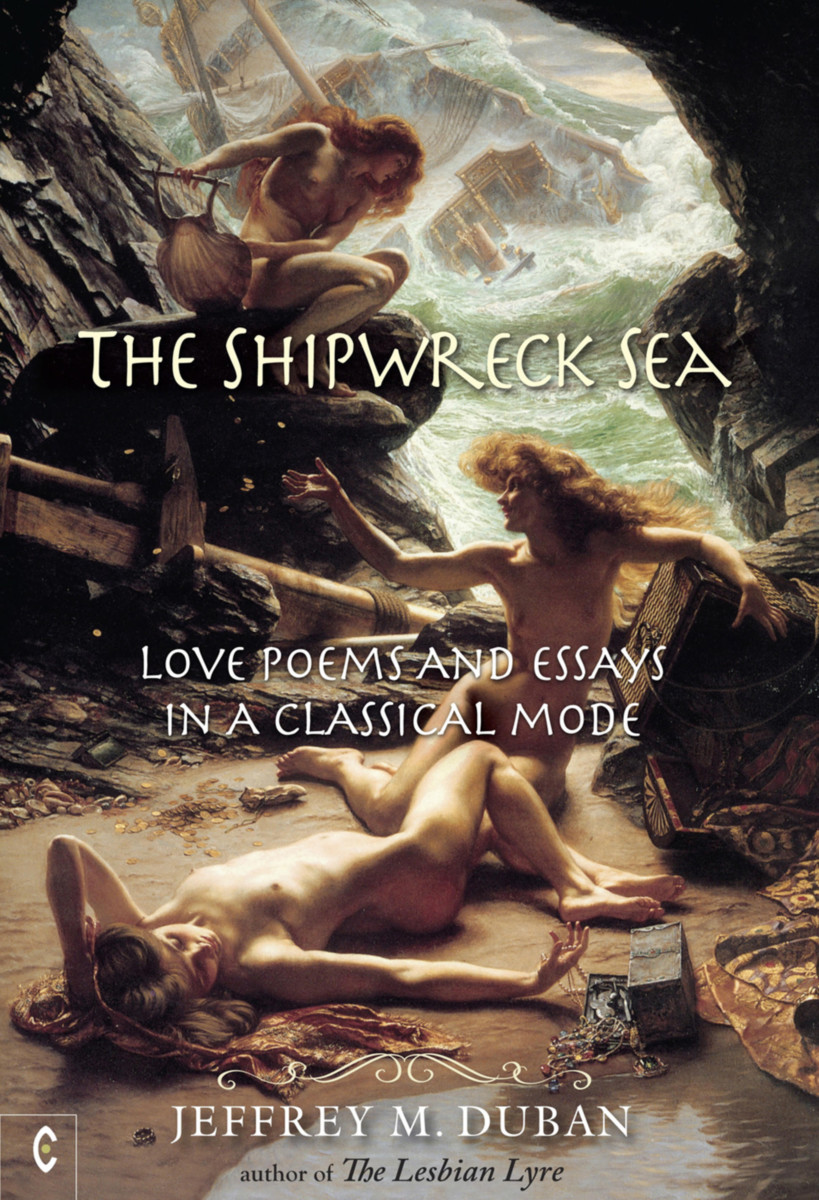 Love Poems and Essays in a Classical Mode

In the words of poet Algernon Charles Swinburne (1837–1909), Sappho was “simply nothing less—as she is certainly nothing more—than the greatest poet who ever was at all.” Born more than 2,600 years ago on the Greek island of Lesbos, Sappho, the namesake lesbian, wrote amorously of men and women alike, exhibiting both masculine and feminine tendencies in her poetry and life. What’s left of her writing and what we know of her is fragmentary, and thus ever subject to speculation and study.

The Shipwreck Sea highlights the love poetry of the soulful Sappho, the impassioned Ibycus, and the playful Anacreon, among other Greek lyric poets of the age (seventh to fifth centuries BC), with verse translations into English by author Jeffrey Duban. The book also features selected Latin poets who wrote on erotic themes—Catullus, Lucretius, Horace, and Petronius—and poems by Charles Baudelaire, with his milestone rejoinder to lesbian love (“Lesbos”) and, in the same stanzaic meter, a turn toward the consoling power of memory in love’s more frequently tormented recall (“Le Balcon”). Duban also translates selected Carmina Burana poems of Carl Orff, frequently Anacreontic in spirit.

The essays include a comprehensive analysis and a new translation of Horace’s famed Odes 1.5 (“To Pyrrha”), in which the theme of (love’s) shipwreck predominates, as well as an opening treatise-length argument on the irrelevance of gender to artistic creation—exploring painting, sculpture, literature, and other Western art forms. (No, Homer was not a woman, and it would make no difference if it were true.) Twenty full-color art reproductions—masterpieces in their own right—illustrate and enliven Duban’s argument.

Finally, Duban presents a selection of his own love poems, imitations, and pastiches, written over a lifetime—composed in the “classical mode,” the leitmotif of this volume.

The Shipwreck Sea is a delightful and always thought-provoking companion to The Lesbian Lyre: Reclaiming Sappho for the 21st Century. Both books vividly demonstrate that classicism yet thrives in our time despite all the modernism marshaled against it.

“This is essentially two books: the first includes translations of Sappho other Greek lyric poets—including Alcman, Anacreon, Archilochus, and Ibycus—presented with encyclopedic discussions of their cultural and formal contexts. The second is an extended critique of Greekless ‘poet-translators,’ for instance, a long polemic against many modern versions of Homer. Unifying them is the problem of capturing the “tenor” of the original, the flavor of its ‘structural and dictional formality.’
“Duban, a practicing lawyer, holds a PhD in classics (Johns Hopkins) and was a poetry editor for the journal Classical Outlook. Underlying his thesis is what he takes to be the negative influence of the modernists, exemplified by Ezra Pound and others. For Duban, an inadequate command of classical languages and philology, coupled with an imperative to be relevant to modern sensibilities, has distorted if not lost the purpose of the original poets.
“Verdict—Rich and gracefully written, this work is by turns insightful, provocative, and grumpy, good in its parts but diffuse as a whole. Accessible to the general reader, though most interesting to those concerned with questions of translation.”
—Thomas L. Cooksey, formerly with Armstrong Atlantic State Univ., Savannah

“Jeffrey Duban wears his profound knowledge of the ancient world and its languages less as erudition, more as immediate breathing presence of deeply rooted instinct and resonant cultural descent. Whether as translator of Sappho, Horace, and others, or as poet in his own right, his work lyrically and evocatively fulfills the urgent need of our souls for affirmation of whence we come.”
—Christopher Lyndon-Gee, Composer, Conductor, and Author, New York & Vilnius

PART 1: Female Homer and the Fallacy of Gendered Sensibility

Jeffrey M. Duban attended the Boston Public Latin School, where he studied Latin, Greek, and French. Majoring in classics at Brown, he also attended the Hebrew University of Jerusalem, where he studied not only classics, but also Sanskrit and the Hebrew Old Testament. He obtained his PhD from Johns Hopkins, briefly entering university teaching and later entered law school, earning his JD from Fordham. As an attorney, he specialized in academic law, representing faculty in promotion and tenure cases, and faculty and students in disciplinary proceedings. In 2016, he published The Lesbian Lyre: Reclaiming Sappho for the 21st Century, a far-ranging volume described as “a humanities degree between two covers.” The Lesbian Lyre was the inspiration for the author’s musical program, in which he serves as narrator, of Sir Granville Bantock’s Sappho: Nine Fragments for Contralto. Duban is also presently collaborating with Greek-Canadian composer Constantine Caravassilis.