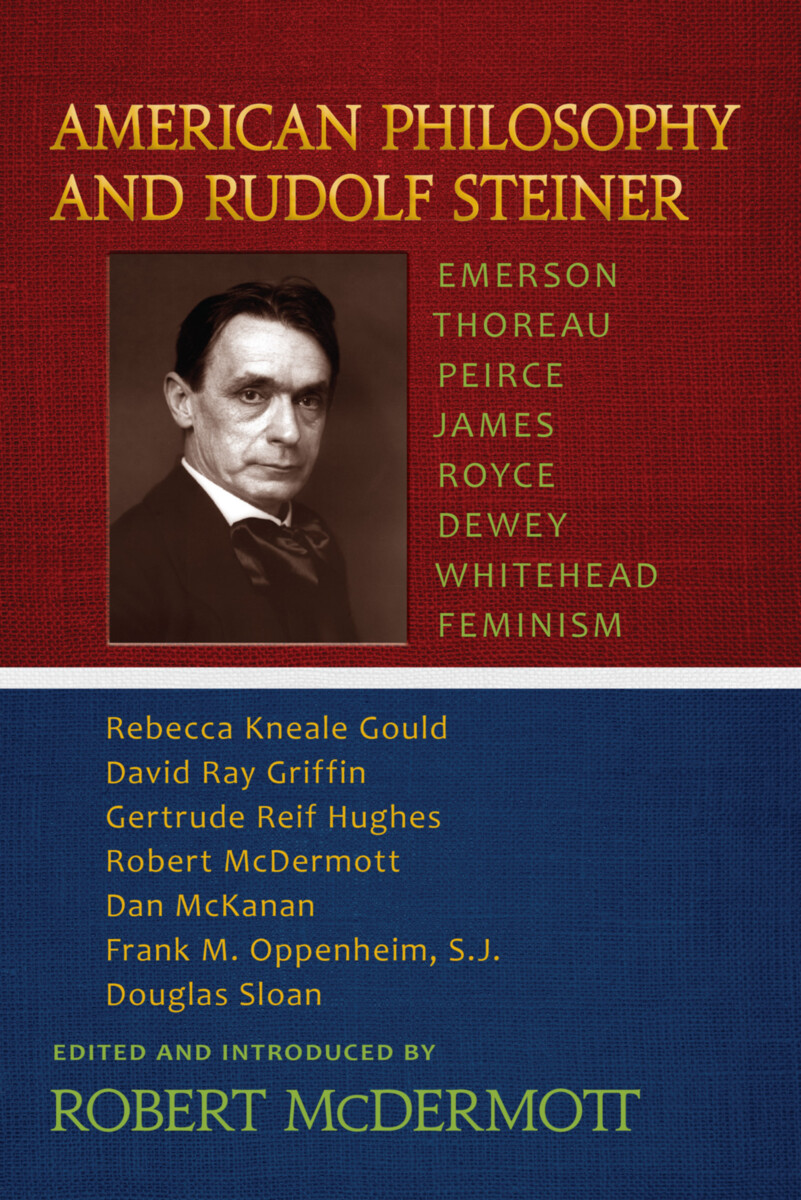 Few thinkers from outside the United States have touched American culture in as many ways as Rudolf Steiner. Agriculture, education, spirituality, and medicine—or more precisely, alternative practices in these fields—all bear clear marks of his influence, for those with eyes to see. Yet the very breadth of Steiner’s impact has perhaps made him harder, not easier, for observers of American culture to notice.

American Philosophy and Rudolf Steiner aspires to raise Steiner’s profile by digging into just one field of inquiry: philosophy. Before he became known to the world as a transmitter of clairvoyant wisdom, Steiner was an academic philosopher, editor of the scientific writings of Goethe and author of a foundational work in philosophy, The Philosophy of Freedom: The Basis for a Modern Worldview, published in 1894. That book expressed in philosophical terms many of the ideas that would later emerge as integral to the spiritual science of Anthroposophy.

Five of the articles in this volume were written as part of a seminar on Rudolf Steiner and American Thought as part of a Project for the Renewal of Philosophy, Science, and Education sponsored by Laurance S. Rockefeller. The contributors—David Ray Griffin, Gertrude Reif Hughes, Frank M. Oppenheim, S. J., Douglas Sloan, and Robert McDermott—were originally published in ReVision: A Journal of Consciousness and Transformation (spring and summer 1991).

7. John Dewey’s Project for “Saving the Appearances”
by Douglas Sloan

Rebecca Kneale Gould is Associate Professor of Religion and Environmental Studies at Middlebury College in Vermont. Gould’s first book, At Home in Nature: Modern Homesteading and Spiritual Practice in America (University of California, 2005) is an ethnographic and historical study of back-to-the-land experiments based on research she conducted while living and working at the homestead of Helen and Scott Nearing. Gould’s more recent publications (in Jon Isham’s, Ignition; Whitney Bauman’s Grounding Religion; Cecile Andrew’s Less is More; and Tufts University Press/Mildred’s Lane Press, Renovating Walden) reflect two of her current research and writing projects: religiously based environmental action and the impact “time-famine” on physical, spiritual, and ecological wellbeing. Gould is the co-creator and coproducer (with director Phil Walker) of the documentary film, The Fire Inside: Place, Passion, and the Primacy of Nature (2012), which premiered in at the Yale Divinity School. She lives in Vermont, with her partner and six well-loved sheep.

David Ray Griffin is Professor of Philosophy of Religion and Theology, Emeritus, Claremont School of Theology and Claremont Graduate University in Claremont, Cali-fornia, where he remains a co-director of the Center for Process Studies. He is a major exponent of the thought of Alfred North Whitehead and Constructive Postmodernism. He has published (as author or editor) thirty-four books, primarily in theology, philosophy, and philosophy of religion, with special emphases on the problem of evil and the relation between science and religion, including The Reenchantment of Science (1988); Unsnarling the World-Knot: Consciousness, Freedom, and the Mind-Body Problem (1998); Religion and Scientific Naturalism: Overcoming the Conflicts (2000); and Reenchantment without Supernaturalism: A Process Philosophy of Religion (2001). He is also a major critic of the official version of the 9/11 attack: Debunking 9/11 Debunking: An Answer to Popular Mechanics and Other Defenders of the Official Conspiracy Theory (2007); The New Pearl Harbor Revisited: 9/11, the Cover-up, and the Exposé (2008); and 9/11 Ten Years Later: When State Crimes against Democracy Succeed (2011).

Dan McKanan is Ralph Waldo Emerson Unitarian Uni-versalist Association Senior Lecturer in Divinity at the Harvard Divinity School. Before coming to Harvard in 2008, he served as department chair and associate professor of theology at the College of Saint Benedict/Saint John’s University, where he began teaching in 1998. He studies religious movements for social transformation in the United States from the abolitionist era to the present. His first book, Identifying the Image of God: Radical Christians and Nonviolent Power in the Antebellum United States (2002), explores theological understandings of violence and nonviolence among abolitionists, pacifists, and temperance activists. Touching the World: Christian Communities Transforming Society (2007) and The Catholic Worker after Dorothy: Practicing the Works of Mercy in a New Generation (2008) deal with the Camphill and Catholic Worker networks of intentional communities. Professor McKanan’s more recent book, Prophetic Encounters: Religion and the American Radical Tradition, is a general history of religion and the Left in the United States

Frank Oppenheim, S.J., is Research Professor at Xavier University (Cincinnati). Ordained to priesthood in 1955, he began teaching at Xavier in 1961 in its department of philosophy (philosophical anthropology, ethics, history of modern philosophy, busi-ness ethics). He specializes in American philosopher of community, Josiah Royce (1855–1916), and in other American philosophers. In addition to numerous articles, Oppenheim’s published works include Royce’s Voyage Down Under: A Journey of the Mind (1980); Royce’s Mature Philosophy of Religion (1987); and Royce’s Mature Ethics (1993). He coedited Royce’s 1915–1916 Metaphysics (1999) and edited two volumes of Josiah Royce’s Late Writings (2001). His magnum opus, entitled Reverence for the Relations of Life: Re-imagining Pragmatism via Josiah Royce’s Interactions with Peirce, James and Dewey, was published by the University of Notre Dame Press in 2004. He lives in Clarkston, Michigan, where he continues his research on Josiah Royce.

Douglas Sloan is Professor of History and Education Emeritus at Teachers College, Columbia University, where he has taught for more than thirty years. During this time, he was also Adjunct Professor of Religion and Education at Union Theological Seminary and The Jewish Theological Seminary, New York, and Director of the Center for the Study of the Spiritual Foundations of Education at Teachers College. From 1992 until 2000, he was also Director of the Masters Program in Waldorf Education at Sunbridge College. His books include Insight-Imagination: The Emancipation of Thought and the Modern Worldand Faith and Knowledge: Mainstream Protestantism and American Higher Education. He and his wife Fern live near Harlemville, New York.

Rudolf Steiner's Philosophy
And the Crisis of Contemporary Thought