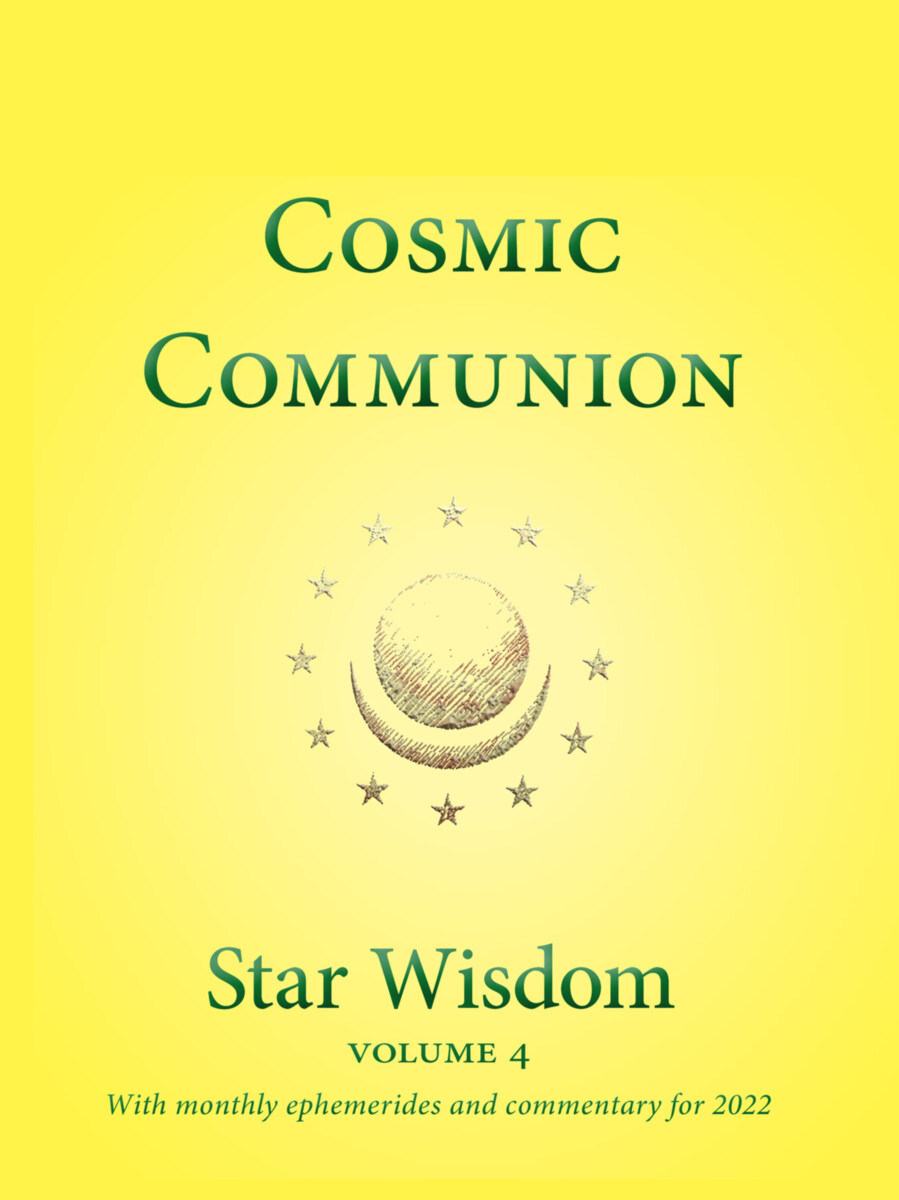 Cosmic Communion includes articles on star wisdom (Astrosophy) and a guide to the correspondences between stellar configurations during the life of Christ and those of today. The guide includes a complete sidereal ephemeris and aspectarian, geocentric, and heliocentric for each day of 2022. Published annually, new volumes are available beginning in November for the coming year.

According to Rudolf Steiner, each step taken by Christ during his ministry, from the Baptism in the Jordan to his Resurrection, was in harmony with, and an expression of, the cosmos. The Star Wisdom series is concerned with these heavenly correspondences during the life of Christ and is intended to help one to build a foundation for cosmic Christianity, the cosmic dimension of Christianity. It is this approach that, until now, has been largely missing from Christianity and its two-millennia history.

Readers can begin this path today by contemplating the movements of the Sun, Moon, and planets against the background of the zodiacal constellations (sidereal signs) in relation to corresponding stellar events during the life of Christ. In this way, the possibility is opened for attuning in a living way to the life of Christ, who since the beginning of his Second Coming in 1933 is now spiritually present in the etheric aura of the Earth.

This edition of Star Wisdom commemorates the 100-year anniversary of Steiner’s lecture series Man and the World of Stars, given at the end of 1922. It was during the final lecture of that course—“Spiritual Knowledge is a True Communion . . .”—that flames began to flick at the walls of the first Goetheanum. At the core of the offerings to this year’s edition of Star Wisdom is the theme of “Cosmic Communion” as described by Steiner in that lecture—imbuing dying Nature with the fire of soul and spirit through human cognition, carrying it into the future.

This edition begins with a fantastic “Letter to the Editor” from reader René Bastien, in which he addresses some of the intricacies of the timeline of the Holy Grail and the life of Parzival that can be discovered through a close reading of Estelle Isaacson’s The Grail Bearer and The Younger Kyot. This exemplifies the theme of the next article, a classic offering from Robert Powell on Grail chronology—understanding history through spiritual knowledge, specifically via the faculty of Intuition. Joel Matthew Park continues this practice of Grail chronology in “Sacrifices of Jesus and Christ, Part I,” setting the stage for further investigation of modern ecosophical practice, which will be featured in the second part of this article next year.

Krisztina Cseri then offers the follow up to last year’s article “Rudolf Steiner and the Christmas Conference.” Whereas last year she focused more on the macrocosmic aspects that made the end of 1923 the most potent time to lay the Foundation Stone, this year she deals with microcosmic aspects in Rudolf Steiner’s astrological biography that set the stage for this sacrificial deed.

In both Joel Matthew Park’s article on the houses, “The Archetypal Language” and Amber Wolfe Rounds’ article “Tone Art,” the focus comes even more directly to the rays of human activity and Mother Earth toward the starry heavens—to the new form of cosmic ritual that is our theme for this year.

The monthly commentaries for 2022 are provided by Joel Matthew Park and supported by Julie Humphreys’ astronomical previews for each month. They offer us an opportunity to connect the spiritual with the stellar configurations of 2022. This guide to direct interaction between human beings on Earth and angels, as well as other heavenly beings connected with the stars, is intended to help the reader develop the capacity to receive wisdom-filled teachings from the spiritual hierarchies.

“Grail Chronology: Classics in Astrosophy, Part V” by Robert Powell, PhD
“The Sacrifices of Jesus and Christ, Part I” by Joel Matthew Park
“Rudolf Steiner and the Christmas Conference: Astrological Aspects of the Laying of the Foundation Stone, Part II” by Krisztina Cseri
“The Archetypal Language: Returning to the Origin of the Houses, Part III”  by Joel Matthew Park
“Tone Art” by Amber Wolfe Rounds
“Working with the Star Wisdom Calender” by Robert Powell, PhD

Glossary
Bibliography and Related Reading
About the Contributors

Amber Wolfe Rounds is a second-generation astrologer with 15 years of experience. She provides astrology services, including predictive forecasting, natal charts for individuals, composite readings for couples or groups, and workshops. Amber composes and performs musical scores from astrology with Zizia. She earned a Waldorf Certificate and an MEd from Antioch University New England after submitting her thesis, Tone Art: Anthroposophy, Astrology, Music.

Kathleen Baiocchi, MPS, Loyola, is a graduate student in the Anthroposophic Counseling Psych Program (AAP). She has worked with flowers, gems, and stars for inner healing since 1989. Kathleen was a student of Zen and Quantum Shiatsu for more than ten years and encountered Anthroposophy in 2013. She is grateful to be a student of Choreocosmos Eurythmy in Boulder, Colorado.

As Above, So Below
Star Wisdom, vol 3: With Monthly Ephemerides and Commentary for 2021