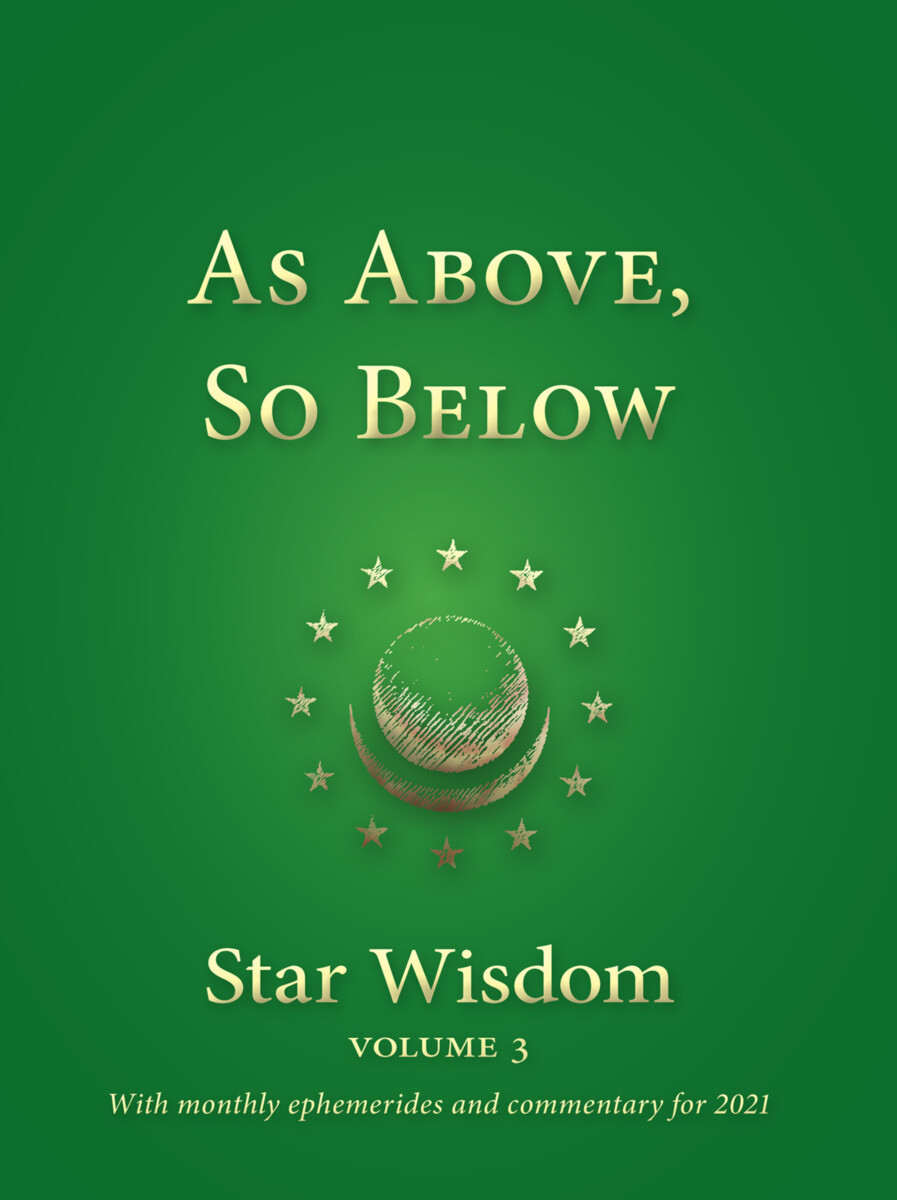 As Above, So Below includes articles of interest on star wisdom (Astrosophy), as well as a guide to the correspondences between stellar configurations during the life of Christ and those of today. This guide includes a complete sidereal ephemeris and aspectarian—geocentric and heliocentric—for each day of the year 2021. Published annually, new volumes are generally available beginning in November for the coming year.

According to Rudolf Steiner, each step taken by Christ during his ministry, from the Baptism in the Jordan to his Resurrection, was in harmony with, and an expression of, the cosmos. The Star Wisdom series is concerned with these heavenly correspondences during the life of Christ and is intended to help in building a foundation for cosmic Christianity, the cosmic dimension of Christianity. It is this approach that, until now, has been largely missing from Christianity and its 2,000-year history.

Readers can begin this path today by contemplating the movements of the Sun, Moon, and planets against the background of the zodiacal constellations (sidereal signs) in relation to corresponding stellar events during the life of Christ. In this way, the possibility is opened for attuning in a living way to the life of Christ, who since the beginning of his Second Coming in 1933 is now spiritually present in the etheric aura of the Earth.

This year’s edition of Star Wisdom commemorates the 100-year anniversary of the Astronomy Course given by Rudolf Steiner in 1921 (now available from SteinerBooks as Interdisciplinary Astronomy). In the tenth lecture of that course (Jan. 10, 1921), Steiner reintroduces to the study of stars the Hermetic Axiom “As Above, So Below” in a new and more complex form.

He observes that, while the starry heavens above us radiate their forces toward the Earth, there is an inverted image of those starry heavens radiating outward from the Earth’s center. This image forms the gesture of the articles in this edition of Star Wisdom—moving from the outer limits of the Zodiac in the article “Rama and Krishna: Karma Research and Star Wisdom,” all the way to the center of Mother Earth in “The Tree of Life: Returning to the Origin of the Houses, Part 2.”

The monthly commentaries for 2021 are provided by Joel Matthew Park, supported by Julie Humphreys’ astronomical previews for each month. They offer us an opportunity to connect the spiritual with the stellar configurations of 2021. This guide to direct interaction between human beings on Earth and angels and other heavenly beings connected with the stars is intended to help the reader develop the capacity to receive the wisdom-filled teachings of the spiritual hierarchies.

“Rama and Krishna Avatars: Karma Research and Star Wisdom” by Robert Powell
“Rudolf Steiner and the Christmas Conference: Astrological Aspects of the Laying of the Foundation Stone” by Krisztina Cseri
“The Bellows of Ahriman: Pluto Reaches Capricorn” by Julie Humphreys
“Anthroposophy, Astrology, Music” by Amber Wolfe Rounds
“Classics in Astrosophy, Part IV: The Holy Grail and the Great Conjunctions” by Robert Powell
“The Path from Pisces to Aquarius as Key to Meeting Christ in the Etheric: A Modern Reading of the Starry Script” by Bill Trusiewicz
“Finding Future Grail Sites:
“An Astrogeographical Investigation” by Joel Matthew Park
“The Tree of Life: Returning to the Origin of the Houses, Part Two” by Joel Matthew Park
“Working with the Star Wisdom Calender” by Robert Powell

BILL TRUSIEWICZ: Et ignotas animum dimittit in artes naturamque nouat. Bill takes this Latin phrase from Ovid’s Metamorphoses as his motto to identify his modus operandi. He translates it: “And his mind he addresses to unknown arts advancing the laws of nature.” It was written of Daedalus the legendary inventor of the famed labyrinth that housed the illegitimate son of the Cretan King Minos. As Daedalus held the keys to the Labyrinthine path leading to the Minotaur, Bill seeks to help others on their journey to conquer their own Minotaurs. And as Daedalus created wings for himself and his son Icarus, to fly from his imprisonment in Minoan Crete back to his homeland in Greece, so Bill endeavors, through art, to create wings for himself and others “to fly from lesser horizons.” Although Bill is an inveterate student with wide interests, love of beauty and experience and observation of LIFE have been his primary teachers. On this basis, he writes articles on spiritual topics, with an emphasis on the experiential, often related to language, Anthroposophy, Rosicrucianism, esoteric Christianity, Sophiology, and the Divine Feminine. His goal is to create a body of writing that is initiatory and allows readers to grow beyond themselves. Bill lives happily with his wife of 45 years in a small hill town between the Catskills of the Hudson Valley, New York, and the Berkshire Mountains of western Massachusetts. Bill’s published articles may be found at https://independent
.academia.edu/BillTrusiewicz.

Amber Wolfe Rounds is a second-generation astrologer with 15 years of experience. She provides astrology services, including predictive forecasting, natal charts for individuals, composite readings for couples or groups, and workshops. Amber composes and performs musical scores from astrology with Zizia. She earned a Waldorf Certificate and an MEd from Antioch University New England after submitting her thesis, Tone Art: Anthroposophy, Astrology, Music.