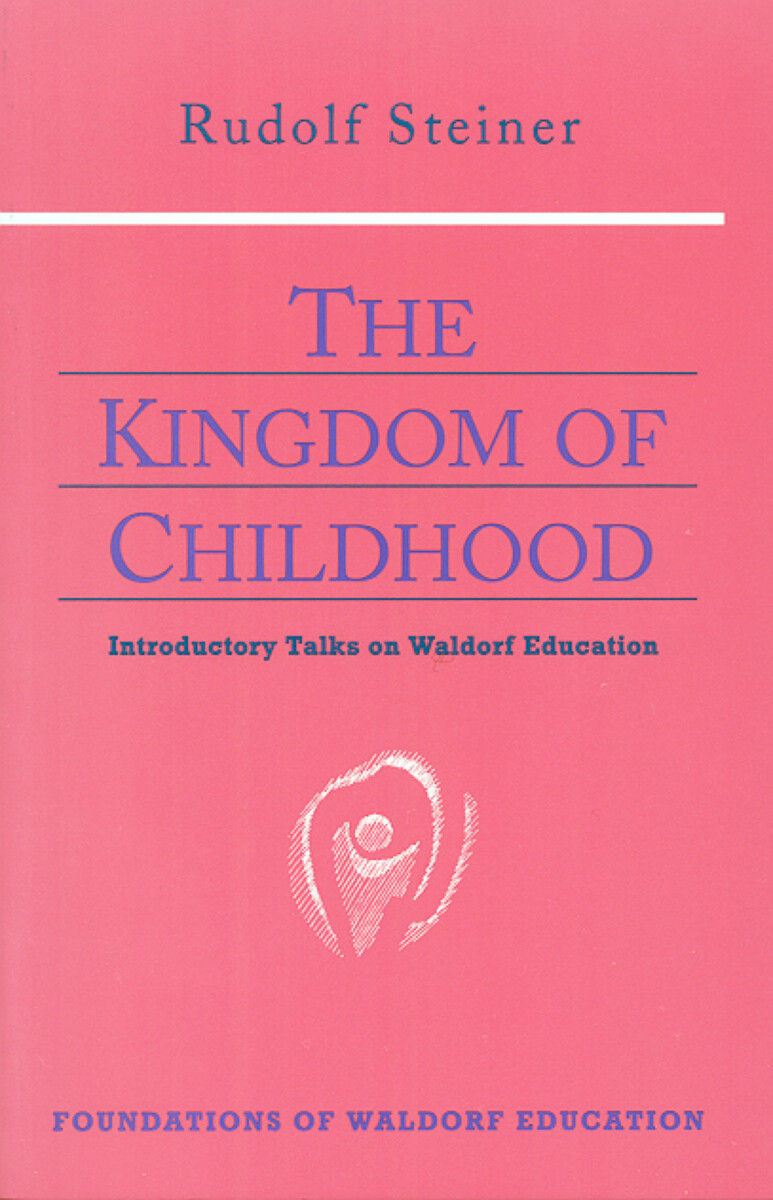 The Kingdom of Childhood

These seven intimate, aphoristic talks were presented to a small group on Steiner’s final visit to England. Because they were given to “pioneers” dedicated to opening a new Waldorf school, these talks are often considered one of the best introductions to Waldorf education.

Steiner shows the necessity for teachers to work on themselves first, in order to transform their own inherent gifts. He explains the need to use humor to keep their teaching lively and imaginative. Above all, he stresses the tremendous importance of doing everything in the knowledge that children are citizens of both the spiritual and the earthly worlds. And, throughout these lectures, he continually returns to the practical value of Waldorf education.

These talks are filled with practical illustrations and revolve around certain themes—the need for observation in teachers; the dangers of stressing the intellect too early; children’s need for teaching that is concrete and pictorial; the education of children’s souls through wonder and reverence; the importance of first presenting the “whole,” then the parts, to the children’s imagination.

Here is one of the best introductions to Waldorf education, straight from the man who started it all.

LECTURE 1: The need for a new art of education. The whole of life must be considered. Process of incarnation as a stupendous task of the spirit. Fundamental changes at seven and fourteen. At seven, the forming of the “new body” out of the “model body” inherited at birth. After birth, the bodily milk as sole nourishment. The teacher’s task to give “soul milk” at the change of teeth and “spiritual milk” at puberty.

LECTURE 2: In first epoch of life child is wholly sense organ. Nature of child’s environment and conduct of surrounding adults of paramount importance. Detailed observation of children and its significance. In second epoch, seven to fourteen, fantasy and imagination as life blood of all education, e.g., in teaching of writing and reading, based on free creative activity of each teacher. The child as integral part of the environment until nine. Teaching about nature must be based on this. The “higher truths” in fairy tales and myths. How the teacher can guide the child through the critical moment of the ninth year.

LECTURE 3: How to teach about plants and animals (seven to fourteen). Plants must always be considered, not as specimens, but growing in the soil. The plant belongs to the earth. This is the true picture and gives the child an inward joy. Animals must be spoken of always in connection with humans. All animal qualities and physical characteristics are to be found, in some form, in the human being. Humans as synthesis of the whole animal kingdom. Minerals should not be introduced until twelfth year. History should first be presented in living, imaginative pictures, through legends, myths, and stories. Only at eleven or twelve should any teaching be based on cause and effect, which is foreign to the young child’s nature. Some thoughts on punishment, with examples.

LECTURE 4: Development of imaginative qualities in the teacher. The story of the violet and the blue sky. Children’s questions. Discipline dependent on the right mood of soul. The teacher’s own preparation for this. Seating of children according to temperament. Retelling of stories. Importance of imaginative stories that can be recalled in later school life. Drawing of diagrams, from ninth year. Completion and metamorphosis of simple figures, to give children feeling of form and symmetry. Concentration exercises to awaken an active thinking as basis of wisdom for later life. Simple color exercises. A Waldorf school timetable. The “main lesson.”

LECTURE 5: All teaching matter must be intimately connected with life. In counting, each different number should be connected with the child or what the child sees in the environment. Counting and stepping in rhythm. The body counts. The head looks on. Counting with fingers and toes is good (also writing with the feet). The ONE is the whole. Other numbers proceed from it. Building with bricks is against the child’s nature, whose impulse is to proceed from whole to parts, as in medieval thinking. Contrast atomic theory. In real life we have first a basket of apples, a purse of coins. In teaching addition, proceed from the whole. In subtraction, start with minuend and remainder; in multiplication, with product and one factor. Theorem of Pythagoras (eleven–twelve years). Details given of a clear, visual proof, based on practical thinking. This will arouse fresh wonder every time.

LECTURE 6: In first seven years etheric body is an inward sculptor. After seven, child has impulse to model and to paint. Teacher must learn anatomy by modeling the organs. Teaching of physiology (nine to twelve years) should be based on modeling. Between seven and fourteen astral body gradually draws into physical body, carrying the breathing by way of nerves, as playing on a lyre. Importance of singing. Child’s experience of well being like that of cows chewing the cud. Instrumental music from beginning of school life, wind or strings. Teaching of languages; up to nine through imitation, then beginnings of grammar, as little translation as possible. Vowels are expression of feeling, consonants are imitation of external processes. Each language expresses a different conception. Compare head, Kopf, testa. The parts of speech in relation to the life after death. If language is rightly taught, out of feeling, eurythmy will develop naturally, expressing inner and outer experiences in ordered movements—“visible speech.” Finding relationship to space in gymnastics.

LECTURE 7: Between seven and fourteen soul qualities are paramount. Beginnings of science teaching from twelfth year only, and connected with real phenomena of life. The problem of fatigue. Wrong conceptions of psychologists. The rhythmic system, predominant in second period, never tires. Rhythm and fantasy. Composition. Sums from real life, not abstractions. Einstein’s theory. The kindergarten—imitation of life. Teachers’ meetings, the heart of the school. Every child to be in the right class for its age. Importance of some knowledge of trades, e.g., shoemaking, handwork, and embroidery. Children’s reports— characterization, but no grading. Contact with the parents.

QUESTIONS AND ANSWERS: The close relationship of Multiplication and Division. How to deal with both together. Transition from the concrete to the abstract in Arithmetic. Not before the ninth year. Healthiness of English weights and measures as related to real life. Decimal system as an intellectual abstraction.

Drawing. Lines have no reality in drawing and painting, only boundaries. How to teach children to draw a tree in shading, speaking only of light and color. (Illustration). Line drawing belongs only to geometry.

Gymnastics and Sport. Sport is of no educational value, but necessary as belonging to English life. Gymnastics should be taught by demonstration.

Religious Instruction. Religion lessons in the Waldorf school given by Catholic priest and Protestant pastor. “Free” religion lessons provided for the other children. Plan of such teaching described, of which the fundamental aim is an understanding of Christianity. The Sunday services.

Modern Language Lessons. Choice of languages must be guided by the demands of English life. These can be introduced at an early age. Direct method in language teaching.

Closing words by Dr. Steiner on the seriousness of this first attempt to found a school in England.