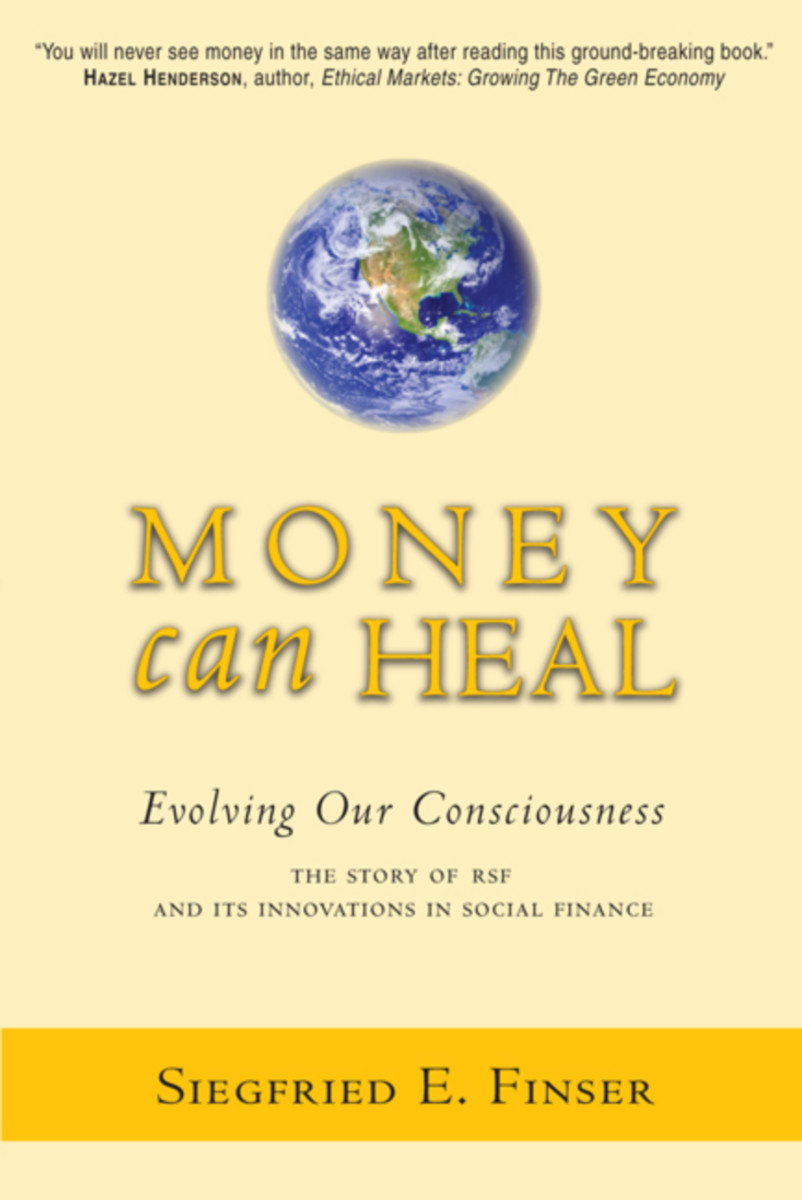 Exploring the wonders of every kind of monetary transaction, Siegfried Finser reveals how all transactions interact with the human psyche. Having evolved through the ages, money is no longer an object so much as it has become a “worldwind” of circulation, moving at various speeds and achieving a myriad of results.

Our human intentions give money its qualities and determine its speed and its effect on people everywhere. From object to pure movement, money is now poised to serve our highest goals. As we have nurtured money in its evolution, we must now take responsibility for directing its great potential in transforming social life, thereby bringing healing to the world. The author gives RSF Social Finance as an example of an organization working to heal our social life.

Siegfried Finser shows a way beyond money as “a thing one acquires” toward money as “movement” among human souls. You’ll never see money the same way again.

RSF Social Finance envisions “a world where a new consciousness is brought to financial transactions, a future when profit is determined by social and environmental benefit, as well as financial return...a future when it is the ability to enrich human life and sustain the earth’s ecology that generates financial support for initiatives and organizations. [RSF holds] a vision of a forward-thinking world that considers the long-term consequences of its actions as essential to right decision-making.”

RSF Social Finance envisions “a world where a new consciousness is brought to financial transactions, a future when profit is determined by social and environmental benefit, as well as financial return ... a future when it is the ability to enrich human life and sustain the earth’s ecology that generates financial support for initiatives and organizations. [RSF holds] a vision of a forward-thinking world that considers the long-term consequences of its actions as essential to right decision-making.”

“Siegfried Finser has written a book that will turn the world around.... This book is seminal in its clarity, impact, intelligence, and integrity. Finser writes what he has lived, which makes the book all the more potent and totally trustworthy. The clear and groundbreaking ideas of the great Rudolf Steiner come alive through this important book. Read it and live it. I give it my highest recommendation.” —Lynne Twist, veteran fund-raiser, global activist, author, The Soul of Money: Reclaiming the Wealth of Our Inner Resources

“The inspiring story of how the Rudolf Steiner Foundation came to be such an extraordinary pioneer in conscious finance, locally and globally. You will never see money in the same way after reading this ground-breaking book.” —Hazel Henderson, author, Ethical Markets: Growing The Green Economy

“This book makes clear that initiatives like RSF need people like Siegfried Finser and his colleagues, not only with a long term perspective but also with a clear understanding what contemporary spiritual knowledge in the field of money means today. Understanding of what it can do in a positive sense is probably the most forceful source for social renewal today” —Peter Blom, Chairman of the Executive Board of Triodos Bank Group, the European leading Social Bank

“In this book, Siegfried Finser, one of the truly great souls I have known, explains how he and his associates at the Rudolf Steiner Foundation have helped people work together in healing ways around money and credit.” —Dr. Clopper Almon, economist

1. Imagination and Money
2. The Transaction of Buying and Selling
3. Borrowing and Lending
4. Giving and Receiving
5. Our Social Life: Three in One
6. Our Evolving Consciousness
7. The Example of RSF
8. The Future

Siegfried Finser, a former Waldorf schoolteacher, has managed a division of Xerox and was Director of Executive Development worldwide for ITT. He has consulted with many large corporations and was president of the Threefold Educational Foundation, treasurer of the Anthroposophical Society in America, and founder of the RSF Social Finance (Rudolf Steiner Foundation), where he continues on the Board of Trustees. He has a BA from Rutgers University and an MA in Educational Psychology from New York University. He frequently lectures on the nature of money and the healing potential in monetary transactions. Mr. Finser lives in Cape Cod, Massachusetts, and Delray Beach, Florida, and now in Mill Valley, California, with his wife of fifty-one years, a teacher and therapeutic eurythmist. He has two sons, an adopted daughter, a foster son and daughter and seven grandchildren. All of them enrich his life and exceed his fondest wishes for them.