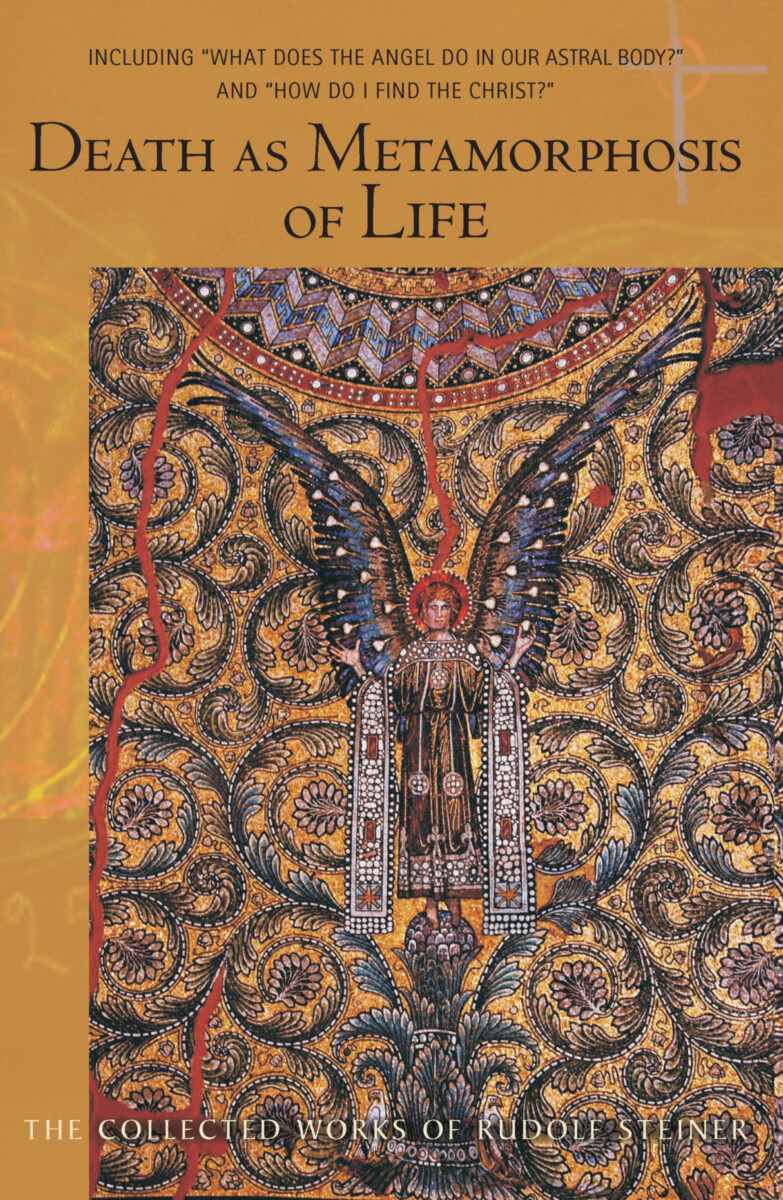 Death as Metamorphosis of Life

“Death as Metamorphosis of Life is a brilliant, exceptional collection. The lectures are intimate, existential, profound, and transformative: they address us in our soul lives—where we live, and where we strive for spiritual experience.... They make clear the necessary and living bond that must unite the inner work of Anthroposophists—the day-to-day inner, spiritual work in our ordinary lives—and the outer work of Anthroposophy: the manifestation of spirit in life; that is, the tasks of service that we take on in the world.... Steiner understood that, if Anthroposophy or spiritual wisdom does not live and grow as a spiritual reality in the souls of those who claim to practice it, then the practical wisdom—their actions in the world as called for by the spirit of the times—will come to nothing.” — Christopher Bamford (introduction)

The lectures in Death as Metamorphosis of Life address us in our soul life and speak to our hearts. They make clear the bond that must unite our inner, spiritual work and the outer work of manifesting spirit in life. For, if spiritual wisdom does not live and grow as a reality in the souls of those who practice it, then the practical wisdom of service called for by the spirit of the times will come to nothing.

The particular realities that Rudolf Steiner focuses on are twofold: working with the dead (and the spiritual hierarchies) and coming to know the Christ. What these two have in common is that they are both Earth-centered. They teach us the fundamental importance of everyday human destiny and earthly life—not just for humanity, but also for divinity and the cosmos. We learn not only what the dead can teach us about the spiritual world and the working of the hierarchies, but also what it means to be human in a spiritual sense. We learn of the importance of working with the dead and the angelic worlds, both for our own and for their development, as well as for the future evolution of the Earth.

The Mystery of Golgotha is equally important; we must understand it spiritually. As Steiner says, “It is the will of the gods that the most important event on Earth must compel us to spirituality.” The Christ must be experienced inwardly, not historically. At the same time, he must be found on Earth—for instance, in human destiny. The more we become aware of what is secretly, invisibly, and unconsciously working in our lives, the closer we will come to working with the dead and to the kingdom of Christ.

How can we find the Christ? Steiner quotes the seventeenth-century mystic Angelus Silesius: “The Cross on Golgotha cannot save you from evil if it is not also raised within you.”

“The Cross is raised within us by the polarity of the powerlessness of our body and the resurrection of our spirit. There is no need for supersensory capacities to realize this experience: only humility and sincerity in seeking are required. Resurrection from the soul death of powerlessness is the true Christ experience that opens the soul to the presence of Christ. Truly, these are astonishing lectures to be treasured: to be read, reread; to be thoroughly understood as something living; to be meditated and made one’s own; and to be carried as a transformative gift into the world.” — Christopher Bamford (introduction)

1. The Three Realms of the Dead: Life between Death and Rebirth

BERN, NOVEMBER 29, 1917: The Mystery of Golgotha. The Significance of the natural sciences in our time. Theology as a hindrance in the understanding of Christ. The influence of the dead and of Christ on human destiny. The reappearance of Christ in the etheric.

NUREMBERG, FEBRUARY 10, 1918: The relationships with the dead. The influence of the dead on the blood and nerve system. The principle of reversal in communicating with the dead. Falling asleep and waking up. Connecting the life of feeling with mental images. The relationship of the living with those who died young and those who were older. Compassionate and egotistical sorrow. Memorial services for the young and for the old. The dependence of the historical, social, and ethical life on the communication between the living and the dead.

3. Humanity and the World

HEIDENHEIM, APRIL 29, 1918: The influence of spiritual science on conception, feeling, and willing. The destructive effect of natural scientific concepts on social life. The human being as microcosm and macrocosm. The laboratory should become an altar. The negation of destiny resulting from one-sidedness. Intellect destroys instinctive capacity. Instinct must be spiritualized. Perception of the spirit by “bringing about another tempo.” A school should give impulses for the whole of life. “The world’s schoolmaster” Woodrow Wilson.

4. Signs of the Times: East, West, and Central Europe

ULM, APRIL 30, 1918: Origin of the word “God.” Earth body, earth soul, physical culture, spiritual culture. The churches. What is it that is commonly venerated as “God”? The East and the new Spirituality. Leninism as the bitterest irony. Tagore, the task of Central Europe between the Orient and Anglo-Americanism.

5. Rebellion against the Spirit

6. What Does the Angel Do in Our Astral Body?

ZURICH, OCTOBER 9, 1918: The working of the hierarchies in the human being. The aims of humanity in the future: fellowship, freedom of religion, insight into the spiritual nature of the world. The counter actions of Lucifer and Ahriman: sexual instincts, egotistic motives influencing health and illness. Misuse of technology.

ZURICH, OCTOBER 16, 1918: The disease of atheism, denial of Christ’s misery, denial of spiritual idiocy. The Mystery of Golgotha and science. Harnack. The situation of humanity at the time of the Mystery of Golgotha. The year 333. The origin of the gospels through atavistic clairvoyance. Tertullian. The year 666. Justinian. The academy of Gondishapur. Mohammed. The Council of Constantinople of 869. Angelus Silesius. Johannes Mueller. Speech as gesture. Woodrow Wilson and Herman Grimm.

Unbornness
Human Pre-existence and the Journey toward Birth