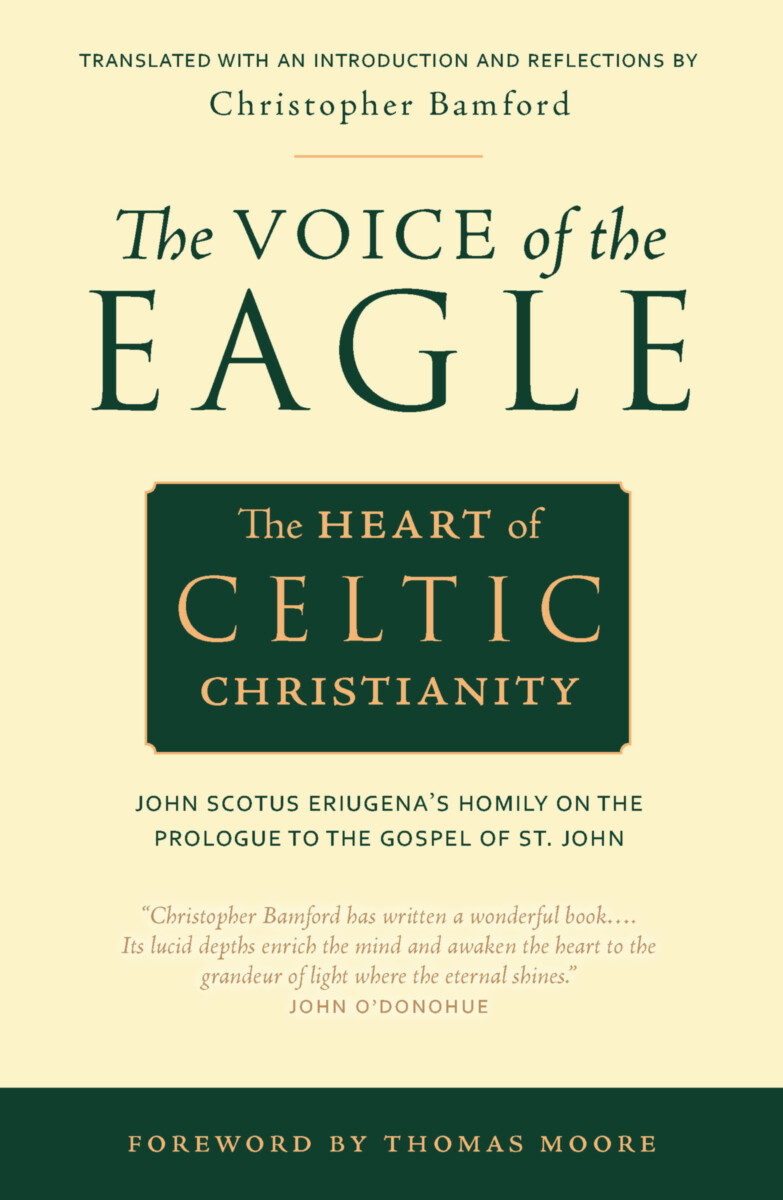 The Voice of the Eagle Edition 2

The Heart of Celtic Christianity: John Scotus Eriugena’s Homily on the Prologue to the Gospel of St. John

Includes John Scotus Eriugena's "Homily on the Prologue to the Gospel of St. John"

John Scotus Eriugena was born and raised in Ireland during the early ninth century. Neither monk nor priest but a "holy sage," he carried to France the flower of Celtic Christianity. His homily, The Voice of the Eagle, is a jewel of lyrical mysticism, theology, and cosmology, containing the essence of Celtic Christian wisdom. He meditates on the meaning and purpose of creation as revealed by the Word made flesh, distilling into twenty-three short chapters a uniquely Celtic, non-dualistic fusion of Christianity, Platonism, and ancient Irish wisdom.

Christopher Bamford's "Reflections" make up the second half of this book, unfolding some of the life-giving meaning implicit in Eriugena's luminous sentences. Inspired both by a personal search for a living Christianity and by a sense of the continuity of Western culture, these "Reflections" offer a contemporary, meditative encounter with the Word, or Logos, as mediated by both St. John's Prologue and Eriugena's Celtic homily.

This favorite of Celtic Christianity, unavailable for several years, has been revised and includes a new foreword by Thomas Moore, author of Care of the Soul.

"Christopher Bamford has written a wonderful book. It combines a rigor of scholarship with a lyrical unveiling of how this wonderful text of Eriugena's can resonate with the hungers and discoveries of our times. It deserves a wide readership. Its lucid depths enrich the mind and awaken the heart to the grandeur of light where the eternal shines."
—John O'Donohue is the author of Anam Cara: A Book of Celtic Wisdom

"The book has been made with broad scholarship, with deep understanding and with love, and will be not quickly used up; one returns to it again and again. It will be cherished by anyone who is thirsty for the water of wisdom that has flowed so abundantly from the spring of Christ."
—Bruno Barnhart is the author of Second Simplicity: The Inner Shape of Christianity

"Eriugena is increasingly recognized as one of the most penetrating spiritual masters of the Christian tradition. The Homily he wrote on the Prologue to the Gospel of St John is the clearest summary of his thought about the role of the Divine Logos in cosmology and anthropology and provides the best introduction to his thought. In The Voice of the Eagle, Christopher Bamford presents an accurate and readable translation of this classic of Christian thought and suggests valuable comments about its meaning."
—Bernard McGinn, Naomi Shenstone Donnelly Professor, University of Chicago Author of The Presence of God: A History of Western Mysticism

"The Prologue of St John's Gospel is so important that it was once read at the conclusion of every Catholic Mass. Eriugena's Homily on it, here translated, is a masterpiece. More accessible than his larger works, it helps to plunge us into the depths of the Word revealed in the Gospel. Christopher Bamford's extended and erudite commentary draws on the great contemplative writers of the Christian tradition of East and West to produce a text whose impact and importance grows the more it is read. The recovery of the Christian tradition, as he writes, "is a task of intuition, interpretation, and meditation."For many readers, that recovery will be nourished and assisted by this fascinating book."
—Stratford Caldecott, Center for Faith and Culture, Westminster College, Oxford

"… a precious gift for all of us who need to be touched anew by the truth of the Christian teaching"
—Jacob Needleman, author of A Little Book on Love and Money and the Meaning of Life

"Eriugena's Christian Neoplationism, untrammeled by the problems of later medieval thought, breathes with a freshness and shines with a light that could enrich authentic Christian thought today….a lovely and illuminating book."
—Geddes MacGregor, author of Angels: Ministers of Grace

The Prologue to the Gospel of St. John
Eriugena’s Homily on the Prologue to the Gospel of St. John
1The voice of the eagle
2 O blessed John
3 Both however run
4 The spiritual bird
5 John therefore
6 In the beginning
7 All things were made through him
8 The consequence of the Word
9 What was made in him
10 All things
11 The light of human beings
12 And the light shone in darkness
13 The natural contemplation of these words
14 There was a man sent from God
15 John introduces John
16 “The witness”
17 The true Light
18 He was in the world
19 Three worlds
20 His own
21 The Word made flesh
22 His glory
23 Full of grace & truth

Reflections by Christopher Bamford
Part One: The Way
Part Two: The Word
Part Three: The World

John Scotus Eriugena (ca.800–ca.877) was born and educated in Ireland. He moved to France around 845 at the invitation of Carolingian King Charles the Bald. He probably never left France, it is unclear whether he was a cleric or a lay person; the general conditions of the time make it likely that he was a cleric and perhaps a monk. Eriugena was an Irish–Catholic Neoplatonist philosopher, theologian, and poet and wrote several works. He is best known today for his works De divisione naturae (The division of nature) and Periphyseon, which has been called the "final achievement" of ancient philosophy, a work that synthesizes the philosophical accomplishments of fifteen centuries. Eriugena's work is distinguished by the freedom of his speculation and the boldness with which he worked out his logical or dialectical system of the universe.

The Mystery of the Trinity
Mission of the Spirit (CW 214)