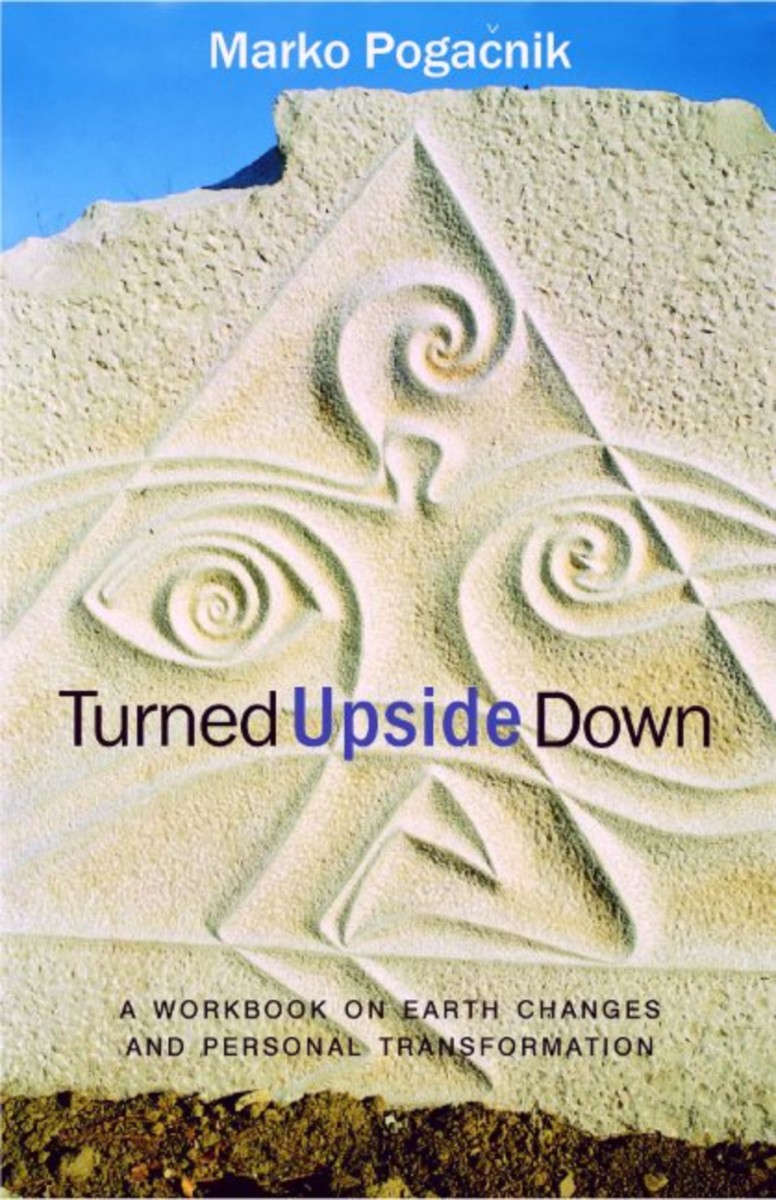 A Workbook on Earth Changes and Personal Transformation

“Since February 1998, the Earth has accelerated her cycles of change. We are also urged to accelerate our own processes of change. I try to provide useful insights into the cycles of change and create possibilities for fellow human beings to become creative interactors with the flow of Earth changes.” — Marko Pogačnik

Whether we like it or not, we earthlings are about to enter a dramatic period of change. The physical earth is changing; it is entering a multidimensional form. The purpose of physical earth as we know it was to help us individuate. Now it is time to enter a new series of dimensions.

The earth is about to give in to a new multidimensional consciousness. However, this cannot happen unless we understand that, as human beings, we are being asked to change. We are being asked to let go of our attachments to physical things. We must learn to let go. Resistance and panic will only hinder the inevitable processes of evolutionary transformation.

Marko Pogačnik describes what we can expect and how to prepare ourselves to deal with it. He presents simple exercises and meditations that will not only help us survive and adapt, but will also—and more important—help the Earth herself bring forth her true Self.

The book’s cover image is a “cosmogram” from a sculpture by Marko Pogačnik.

Sometimes it isn’t very clear where a journey begins until you get a bit down the road. So it was that our Monday night study group at the Rudolf Steiner Branch in Chicago, IL found its way to begin the study of Marko Pogačnik’s book entitled Healing the Heart of the Earth. Having just completed a study of Steiner’s Mystery Knowledge and Mystery Centers, we found in Pogačnik’s work practical examples and applications for working with the imaginations of the natural world described in this lecture series. A few months into our study we were blessed with an opportunity to welcome and meet Marko Pogačnik as he was passing through Chicago on his way to a conference at Michael Field’s Agricultural Institute. Pogačnik had just completed a conference in Great Barrington, MA, and we could “have him” for a day. We jumped at the opportunity and began to plan activities through which we could engage him, ask questions, and allow him to share his work with us in person.

Marko arrived in Chicago on a beautiful sunny day in early June. He was met at the airport and given a quick driving tour to different neighborhoods ending at Navy Pier for lunch. A first impression of this author we’d been studying was one of a solid, calm presence. During lunch Marko explained that the title of the book Healing the Heart of the Earth is a bit inaccurate. The heart of the earth, he offered, does not need healing; the heart of the earth is in fine shape. This book is an exploration of his activities and experiences in working to heal disturbed landscapes and he suggested it could simply be called “Methods of Earth Healing.” Hearing this confirmed our enthusiasm for studying his material knowing that it is practical and accessible to each one of us. Marko also expressed a deep interest for working more with American landscapes and cities, as well as his appreciation of chocolate brownies.

Following lunch we made our way to the Branch building on Lincoln Avenue and prepared for the afternoon gathering with members of the Rudolf Steiner Branch. Brief introductions of Marko and his work were made and then the group walked together to a nearby park to share an experience. Marko indicated that to work more effectively, he would need to spend a night in the area in which he was planning to work. However, he was able to lead us through exercises and imaginations that gave us a sense of how we could each work independently to have an experience of nature spirits and elemental beings. At the end of this session, most of the members broke for dinner, anticipating another session in the park that evening.

A few of us returned with Marko for a tour of our building. As we were beginning renovation, we were interested in his impressions of the energy of our building. While snacking on nuts and trail mix during the tour in the basement, Marko commented on how pleased the Being of the Building was with the renovations that were taking place. He also identified an area in the basement which emanated a strong creative impulse.

After a short dinner break and rest, just before introductions, Marko gently suggested that a return to the park as planned was not right for this evening. He felt it was more important to share his perceptions of our nation’s capital during a recent visit to Washington, D.C., as well as the importance of New York City as a major energy center. We were deeply impressed with his imaginations around the American Flag as an important esoteric symbol balancing the cosmos and the earth, as well as a picture of the human being as it is reflected in the landscape of the island of Manhattan.

The evening concluded with a lively question and answer session, after which Marko embarked on the journey north to East Troy, WI, clutching a box of chocolate brownies. During the two hour drive, while we conversed about one of his other books, The Daughter of Gaia, Marko further clarified the importance of exploring, respecting, and loving all facets, aspects and processes of our human bodies. He explained that a more complete knowledge and acceptance of our own human physical and spiritual bodies will allow us to better understand and work into the Earth. Marko told that this book was not translated. It is the only one he had intentionally written in English. After turning west off of Interstate 94, passing the landscape illumined by a brilliant full moon, Marko was in wonder of the hills that began to appear. He listened to the explanation of the glacial kames in the Kettle Moraine area, and he seemed genuinely surprised and pleased to observe that not all of the Midwest was flat. Marko was delivered to his Wisconsin hosts already anticipating the morning light when he would further explore this local terrain.

Now that we are down the road a bit with our continued study of Healing the Heart of the Earth, the group renewed its support of an initiative in the city of Chicago. The Songtrails Project takes us along once Native American trails that now have been paved over with concrete through urban development. The activities of walking and singing, two primary human experiences, nourish and strengthen our connection with the earth and the cosmos. While we seek to encourage a sense of community among ourselves, the Earth and her Beings, our intention is also to bring awareness of how human activity impacts the earth if we are not conscious of the subtle realms of life. Working through Marko’s book enlarges our understanding of the elemental realms, his exercises improve our perceptions of nature beings, and his experiences inspire our development of this project as a true earth healing endeavor for our own city. We agree with Marko’s statement that urban development in and of itself isn’t necessarily evil if done with conscious interaction and love between ourselves and the natural world.

Aside from the above project, the study of this book has influenced each member of our group in a variety of ways. Marko’s willingness to share his process, failures as well as successes, has given us confidence that we, too, can do this work. The exercises are written clearly and articulately. We have been delighted to discover how easy some of them are to practice in a variety of circumstances. As a prerequisite to earth healing, Marko challenges us to work on our own personal human development. Through the generous offering of his own experiences, he humbly shows us how to move through all aspects of our own being into the earth.

Our journey continues to be blessed through taking up the work of this modest man. Marko Pogačnik’s work is courageous and bold and will speak to any human heart seeking to renew its own connection to the heart of the earth.

1. It’s Time to Change: Renew Your Life!
2. The Fundamental Causes Leading to the Catastrophe of September 11
3. After the Catastrophe: Humanity’s New Inner Organization
4. February 2002: The Decisive Somersault in Etheric Space
5. After the Somersault: The Rushing Torrent of the Great Purification
6. The Consciousness of Earth Organizes Anew Its Plane of Feeling
7. The Next Goal of the Processes of Change
8. The Present State of Affairs

Appendix: Overview of the Exercises
1. The Inner Child
2. The Human Holon
3. The Various Extensions of the Human Being
4. The Heart Is the Midpoint
5. The Somersault of Space
6. Clarification and Transformation of Shadow Aspects
7. The Seven Foundation Stones of the New Ethic
8. The Changed Elemental Beings
9. Discovery of the Spiritual-Emotional Plane

Coming Home
The Birth & Transformation of the Planetary Era

The Inner Life of the Earth
Exploring the Mysteries of Nature, Subnature, and Supranature