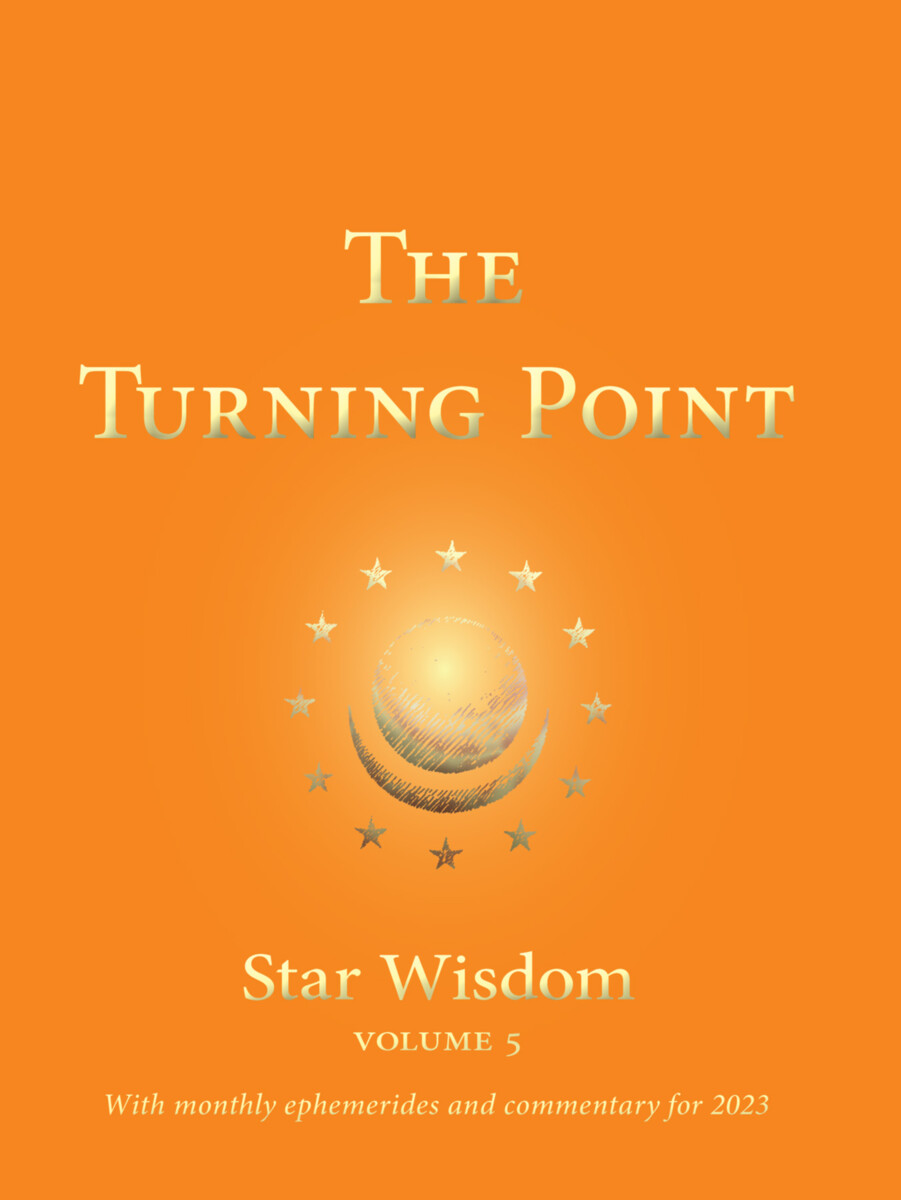 “Since the Mystery of Golgotha took place, many people can proclaim the name of Christ, and from the twentieth century on there will be a constantly increasing number of people who can communicate the knowledge of the Christ being given in spiritual science. Twice already, Christ has been crucified: the first time physically in the physical world at the beginning of our era, and a second time in the nineteenth century spiritually.... One could say that humanity experienced the resurrection of the Christ being’s body then; from the twentieth century on, it will experience the resurrection of Christ consciousness.” — Rudolf Steiner (Approaching the Mystery of Golgotha, May 2, 1913)

Star Wisdom, volume 5, includes articles of interest concerning star wisdom (Astrosophy), as well as a guide to the correspondences between stellar configurations during the life of Christ and those of today. This guide comprises a complete sidereal ephemeris and aspectarian, geocentric and heliocentric, for each day throughout the year. Published yearly, new editions are available beginning in October or November for the coming year.

According to Rudolf Steiner, every step taken by Christ during his ministry between the baptism in the Jordan and the resurrection was in harmony with—and an expression of—the cosmos. Star Wisdom is concerned with these heavenly correspondences during the life of Christ. It is intended to help provide a foundation for cosmic Christianity, the cosmic dimension of Christianity. It is this dimension that has been missing from Christianity in its two-thousand-year history.

This year’s edition of Star Wisdom focuses on the year 2023 as the 100th-year commemoration of Rudolf Steiner laying the Foundation Stone Meditation at the founding of the General Anthroposophical Society during the Christmas Conference in 1923—a “turning point of time.” Additionally, this edition looks to the year 2023 in the light of its potential for being a turning point in today’s cultural crisis, as indicated by the position of Neptune on the cusp of Aquarius and Pisces.

Articles in this volume begin with Steffen Hartmann and “Rudolf Steiner’s Michael Prophecy and the Years 2012 to 2033,” originally published in his book of the same title. Following is Robert Powell’s article “The 33⅓-year Rhythm” and its cosmic and human significance. Also from Robert Powell is his “Astronomia Nove” in the continuing series of articles “Classics in Astrosophy,” which also features a section by a pioneer of Astrosophy, Willi Sucher.

Krisztina Cseri returns in this volume with part 3 of her “Rudolf Steiner and the Christmas Conference: Astrological Aspects of the Laying of the Foundation Stone,” followed by “Conversations about Time and Space” by Natalia Haarahiltunen. And the third article by Robert Powell is “The Staff of Mercury and the Significance of the Period 39 Hours from Christ’s Death on the Cross to His Ressurection.”

Also featured is the article “Asclepias,” which takes a fresh look at biodynamics and the environment from cosmic, biological, and ancient Greek perspectives.

Joel Matthew Park returns with part II of “The Sacrifices of Jesus and Christ,” followed by “On Christianizing the Chakras,” by Norm D. Feather.

Joel also produced the “Commentaries and Ephemerides” this year, accompanied by extensive quotations from the visionary Anne Catherine Emmerich.

“The Seven Ideals of the Rose of the World”
by Robert Powell, PhD

“Rudolf Steiner and the Christmas Conference, Part III: Astrological Aspects of the Laying of the Foundation Stone”
by Krisztina Cseri

“Conversations about Time and Space”
by Natalia Haarahiltunen

“The Staff of Mercury and the Significance of the Period of Thirty-nine Hours from Christ’s Death on the Cross to His Resurrection”
by Robert Powell, PhD

“The Sacrifices of Jesus and Christ, Part II”
by Joel Matthew Park

“On Christianizing the Chakras”
by Norm D. Feather

“Working with the Star Wisdom Calendar,”
by Robert Powell, PhD

Glossary
Cited Works and Related Reading
About the Contributors

Willi O. Sucher (1902–1985) encountered the work of Rudolf Steiner in 1919 at the age of seventeen. He devoted his life to anthroposophy, working closely with Dr. Elizabeth Vreede, a leader in the spiritual research of astronomy and mathematics in the Anthroposophical Society. Sucher devoted almost sixty years to developing the new "star wisdom" called astrosophy, which he considered most appropriate for modern humanity.

Natalia Haarahiltunen studied singing and Anthroposophy at Snellman College from 1999 to 2003. She invited Robert Powell to Finland in both 2012 and 2013. She was the editor of Starlight from 2019 to 2021. In recent years, Natalia has been collaborating with Joel Park to develop the Footwashing service. Her interest toward Star Wisdom has been growing year by year, and she has been working with Krisztina Cseri.

Asclepias is Zizia—Jarrod Fowler and Amber Wolfe. Fowler is a horticulturist, entomologist, and percussionist/rhythmist. He samples sounds from terrestrial habitats. Wolfe is a teacher, astrologer, and singer/multi-instrumentalist. She composes scores from celestial maps. Together they create experimental music with collaborators. Zizia has performed across the United States and released cassettes, CDs, and seed bombs. Pisaura (Michael Pisaro-Liu / Zizia), Asteraceae was published by Sedimental Recordings in 2020. Visit online at https://zizia.xyz.

Norm D. Feather is a private individual and known by only a few. Simultaneously, and paradoxically, he is a different man to different people and moves in many circles. He is at times a jazz pianist, at others a tour guide, a Thoreou enthusiast, and a farmer. He is at all times a Fool, a Christian Hermeticist, and above all a Musketeer. Tous pour un et un pour tous!

As Above, So Below
Star Wisdom, vol 3: With Monthly Ephemerides and Commentary for 2021