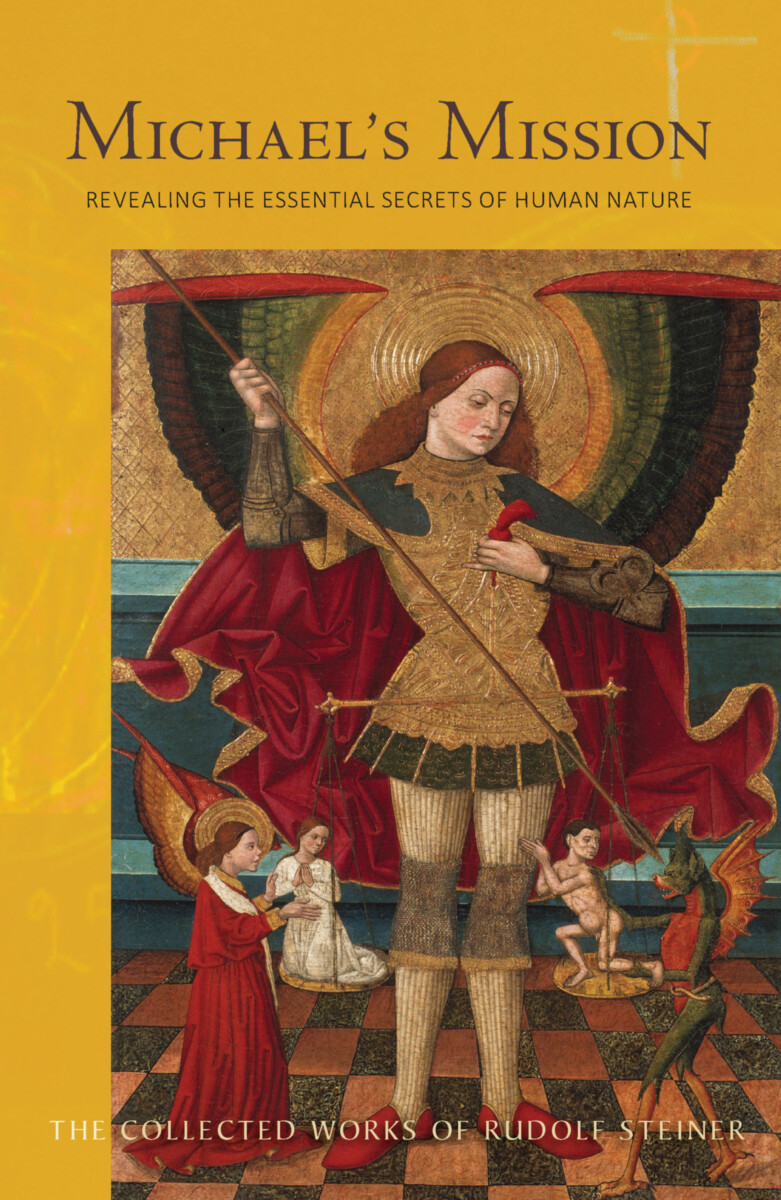 “This will generate a struggle covering the face of the whole earth. The one and only remedy for this nonsense being made of human evolution will be the path that can lead humanity to the spirit—the path of Michael, which finds its continuation in the path of Christ.” — Rudolf Steiner

Speaking in the aftermath of World War I, Rudolf Steiner presents a series of extraordinary lectures on the power and mission of the Archangel Michael. He paints on a broad canvas—in the context of cosmic and human evolution—revealing Michael’s tasks in the past, present, and future. Michael, originally the countenance of Yahweh, has transformed from a “night spirit” into a “day spirit.” As “the Countenance of Christ,” Michael helps us find a balance between luciferic and ahrimanic tendencies. The old dualism such as good versus evil, says Steiner, needs to be replaced by the trinity of Lucifer–Christ–Ahriman. Filling our hearts with the Christ impulse creates equilibrium between the luciferic influence that imbues our head and the ahrimanic influence that works in our limbs.

Steiner describes how humanity faces three dangers in the social sphere—spiritual life could flow into the “pit of mendacity” ruled by Ahriman; individual rights might descend into a luciferic “pit of selfishness”; and economics could sink into the cultural sickness and death of the Asuras. To prevent Western culture from perishing, it will need to turn toward the contemporary “threefold” approach to society.

Steiner also speaks of the principle of metamorphosis in connection with evolution and devolution, as he showed in the pillar designs of the newly built Goetheanum. Architectural styles express human evolution, as we can see in Greek temples, gothic Cathedrals, the Grail temple, and the building at Dornach. Among many other themes, Rudolf Steiner addresses the problem of natural necessity and freedom and the abolition of the trichotomy of body, soul, and spirit at the 869 Council of Constantinople.

“‘Nature’ provides us with the materials through which we can compete our development, but the actual fulfilment of human completion, or eudaimonia, is dependent upon our own freely chosen action. Rudolf Steiner presents a broader context of human evolution and development.... Human development has passed the point that is provided by outer nature. The remainder of Earth evolution depends upon the individual, inner spiritual activity of human beings.” — David Jones (from the introduction)

This volume is a translation from German of Die Sendung Michaels. Die Offenbarung der eigentlichen Geheimnisse des Menschenwesens (GA 194, edited by Hella Wiesberger). Seven of these lectures were previously published in English as Ideas for a New Europe.

The Archangel Michael
His Mission and Ours