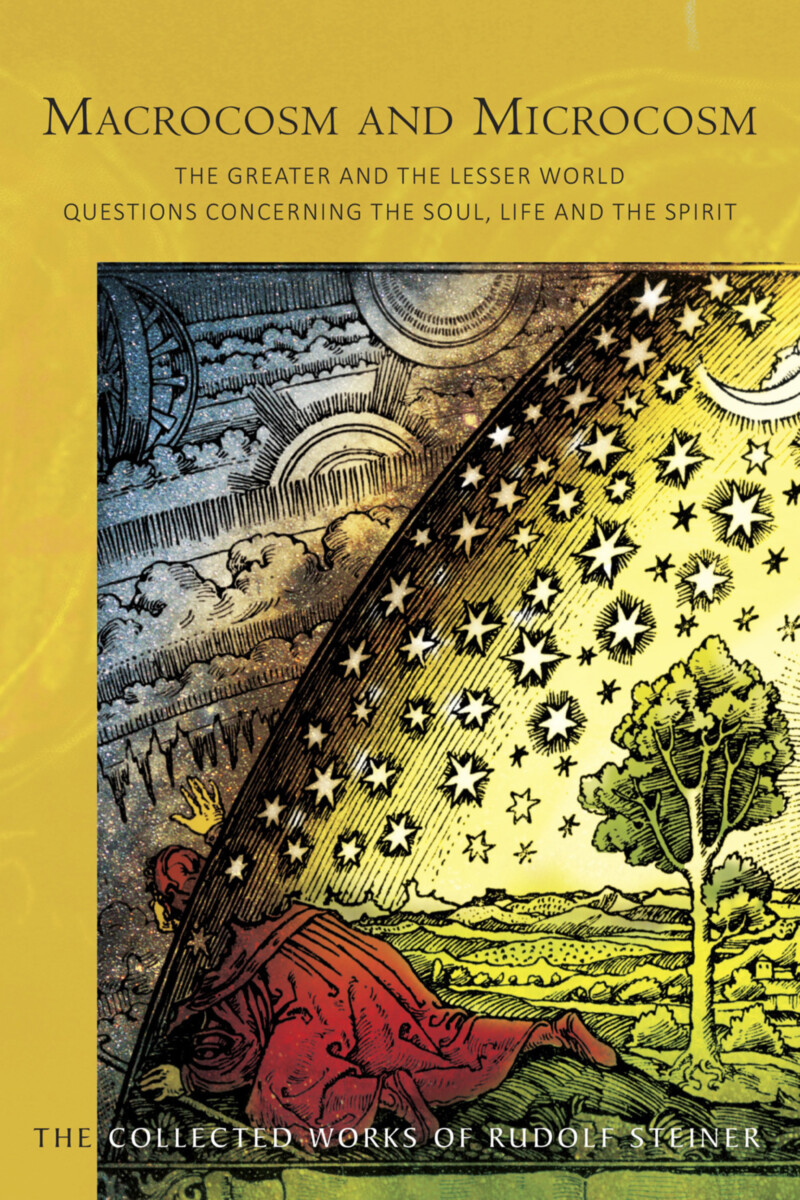 The Greater and the Lesser World: Questions Concerning the Soul, Life and the Spirit (CW 119)

Rudolf Steiner shows how deeply and intimately human beings, the microcosm, are related to the macrocosm. But for Steiner the macrocosm is more than just the physical universe. It includes many hidden realms—including the world of elements and the world of archetypes—that lie behind outer manifestations such as our physical body. The macrocosm works within us continuously—in the daily rhythm of sleeping and waking and in the great cyclical interchange between incarnation on Earth and our time between death and rebirth.

Steiner discusses various paths of self-development that lead across the threshold to spiritual dimensions, transforming human soul forces into organs of higher perception. In the future, we will even have the capacity to evolve a form of thinking that is higher than the intellect—thinking of the heart.

In this classic series of lectures—now retranslated and featuring a previously unavailable public address—Rudolf Steiner discusses the planets and their connection with our sleeping and waking life; the inner path of the mystic; the “greater” and “lesser” guardians of the threshold; the Egyptian mysteries of Osiris and Isis; initiation in the Northern mysteries; the four spheres of the higher worlds; mirror images of the macrocosm in humankind; the strengthening powers of sleep; the symbol of the Rose Cross; reading the akashic record; four-dimensional space; the development of future human capacities, and much more.

Public Lecture, Vienna, Mar. 19, 1910
The human being’s cycle through the sense world, soul world, and spirit world. Experiences after death in the soul and spirit worlds. Formation of karma. Descent to a new birth. Verse: “Riddle upon Riddle”

2. Vienna, Mar. 22, 1910
The planets and their connection with sleeping and waking life. Differentiation of sentient soul, intellectual (or mind) soul, and consciousness soul. The influences of the spiritual forces of Venus, Mercury, and Moon on the sentient, intellectual, and consciousness souls in waking, and of Mars, Jupiter, and Saturn during sleep. The planetary system as a cosmic clock.

3. Vienna, Mar. 23, 1910
The path of the mystic: perceiving the physical and etheric bodies from within. Experience of the cycle of the year. The sentient body as a boundary between inner and outer experience. It screens from everyday consciousness what would otherwise produce a burning sense of shame. The Lesser Guardian of the Threshold. The cycle of nature. The Northern Mysteries. The sun at midnight. The ability to see through matter. The Greater Guardian of the Threshold.

4. Vienna, Mar. 24, 1910
Faculties of the human soul and their development. The regions beyond the two frontiers within which normal human consciousness is enclosed. Passing the Lesser Guardian of the Threshold through conscious attention on waking. Experience of the three main forces of the soul as an incoming stream from the macrocosm. Cosmic thinking, cosmic feeling, cosmic will. Cosmic forces must be replenished by the efforts of the individual to reach the higher worlds. The outcome of sins of omission. The “mystic vow.”

5. Vienna, Mar. 25, 1910
Egyptian mysteries of Osiris and Isis. Experiences of the candidates in the process of initiation. Preparation of inherited characteristics. The “upper” and the “lower” human. Moving backward in the etheric body to the frontier of the mineral kingdom. The descent into the physical body. The priest of Hermes as guru. The Rosicrucian path. Mystics of the Middle Ages.

6. Vienna, Mar. 26, 1910
Experiences of initiation in the Northern Mysteries. Danger on the ecstatic path of losing one’s ego. Danger on the mystical path of over-inflating the egoistical ego. Methods for strengthening the ego during initiation in the Northern Mysteries. Experiences connected with the seasons of the year. Helpers in the process of initiation. Conscious ascent into the macrocosm. Revelation of spiritual beings in the elemental world (fire, water, air, earth). The spiritual world: zodiac and planets. The world of reason; the world of archetypes.

7. Vienna, Mar. 27, 1910
The four speres of the higher worlds. Connection of the four temperaments with the four elements of the elemental world. Adaption to the world of spirit after balancing the temperaments. At the threshold of the world of spirit, objective perception of one’s own imperfection as an image composed of all the elements. Passing the Greater Guardian of the Threshold. Self-knowledge and self-perfection of one’s own imperfection. Interaction with progressive spiritual beings. Forces for developing clairvoyant consciousness in the world of archetypes.

8. Vienna, Mar. 28, 1910
Mirror images of the macrocosm in human beings. Sense impressions arise by a portion of the elemental world being held back. The nervous system as an inner solar system. The basis for the human microcosm—the senses, nerves, and brain—formed by macrocosmic forces from the elemental world, spiritual world, and world of reason. The formation of the higher spiritual organs through the forces of the world of archetypes. The Rosicrucian path. The inner activity required to attain the capacities needed to rise to imaginative, inspirative, and intuitive knowledge.

Spiritual organs of perception and the strengthening powers of sleep. Formulae and symbols. The thinking of the heart. Three stages of the faculty of judgment: the feeling for truth, critical thought of the intellect, heart thinking. Learning how to deal with contradictions. Preparation for experience of the higher worlds. The ego viewed from twelve different vantage points. Surrender of personal opinions. Spiritual-scientific findings and the language of logical thought.

10 Vienna, Mar. 30, 1910
Three evolutionary stages in human understanding: unconscious logic of the heart (past); intellectual logic (present); conscious logic of the heart (future). Memory. Changes in the spiritual researcher’s memory from ordinary memory in time to spiritual memory in space. Reading in the akasha chronicle. Transition from intellectual thinking to the thinking (or logic) of the heart. The fourth dimension. The formation and transformation of heart and brain in connection with macrocosmic development. Intellectual questions.

11. Vienna, Mar. 31, 1910
Development of future human capacities. Adaptation to the various conditions of our planet. The spiritual researcher’s appeal to people’s sense of truth. The origin of the physical in the spiritual. Solar influences in plants and humanity. Physical organs that point to the past, and those that point to the future; heart and larynx. The future evolution of speech. Breath exercises. Wisdom and love. Verse: “God’s Protecting, Blessing Ray...”