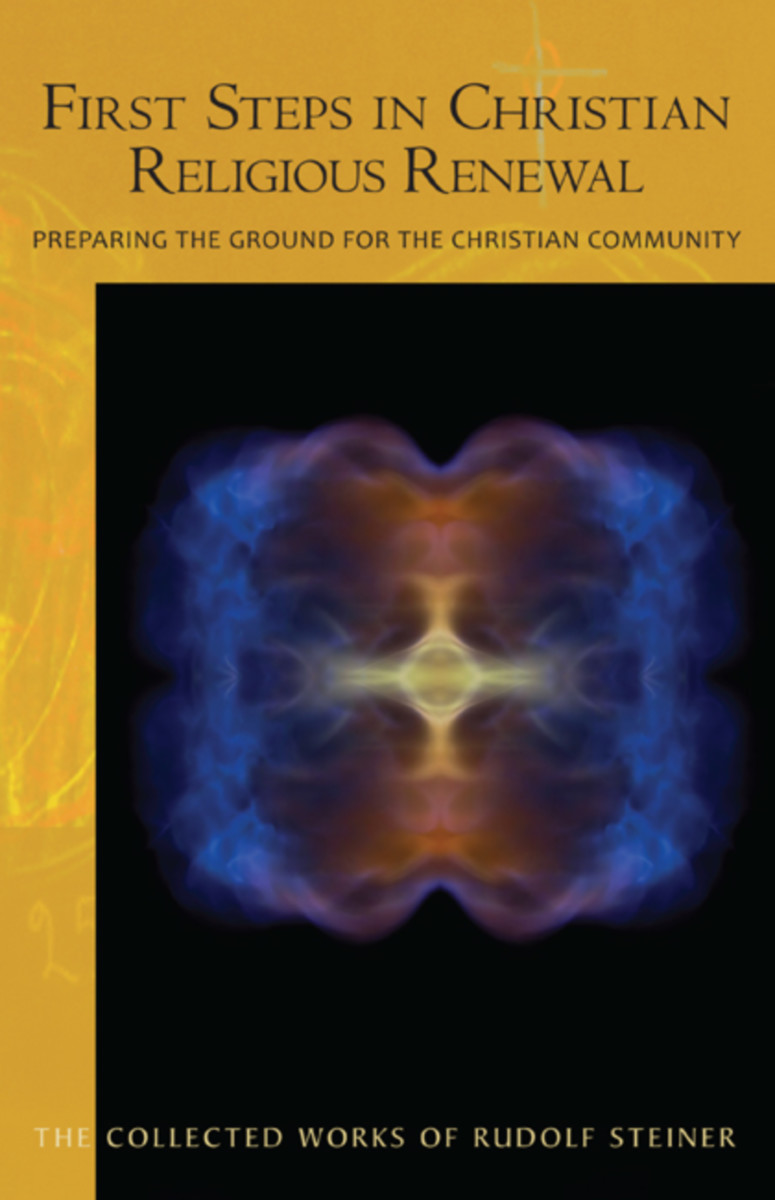 Preparing the Ground for The Christian Community (CW 342)

The lectures and discussions presented in First Steps in Christian Religious Renewal make up the first of the five "Priest Courses." They record the first steps of the remarkable journey taken in 1921 by a small group of dedicated souls who, out of their own inner needs and guided by Rudolf Steiner, sought a path to Christian religious renewal.

Addressing the group with warm intimacy, Steiner frames their task not primarily in theological terms, but as a need for a renewing “the religious,” or “the working of the religious element as such.” For this, the sermon (or how we speak) is central, for today we must use language in new ways. We cannot reopen the spiritual worlds by starting from “old conditions.” Traditional religious life has become too corrupted, while modern culture has radically changed and become divorced from tradition. In earlier times, people could understand concepts such as “Christ,” “grace,” and “salvation,” but now we need a new starting point, one that begins with the reality that we cannot teach anything we do not believe and have not experienced. When we speak, images and symbols must be experienced as real; we can no longer hold the split view that accepts both modern science as it is and spiritual reality as it is.

Next, Steiner turns to the group’s stated concerns: ritual, the sermon, community building, and the relationship between these and individual efforts to awaken to the “I.” Here, a question arises about the extent to which such matters should become conscious. The question arises: How do we avoid conscious religious content from becoming abstract, intellectual, and cut off from feeling? All too often, intellect is confused with consciousness. Yet Goethe, for one, was certainly conscious and was able to think pictorially and live in images without falling into intellectuality. We, too, must learn to do so.

In a sense, however, even this is secondary. Community building, which requires finding “what lives and weaves between human beings,” is the key. To bring the community to birth, Steiner advises the group to abandon teaching or exercising power through words and concepts. Instead of focusing on “knowledge of God” (theology), they must find a way to communicate actual “life in God”—experience of the divine within the soul. This means that they must learn to live in a content that is greater and beyond what they can speak.

Thus, the importance of ritual, which must remain simple while expressing inner transformation of the human being, or the “en-Christing,” imbuing the human being with Christ. Steiner explains, “Human beings are not born imbued with Christ beforehand by way of inheritance; they must find the Christ in themselves.” Such transformation, “en-Christing,” can be expressed symbolically in many ways through simple, effective, ritual.

1. STUTTGART, JUNE 12, 1921: Difficulties of religious working in the current situation. Theology or religion. The Word. The sermon. Natural causality and ethical impulses: how do human beings fit, with their ethical impulses, into the laws of nature? Answers of spiritual science. Doctrine and ritual. Preliminary answers to questions in three areas: ritual, sermon, and community building.

2. STUTTGART, JUNE 13, 1921: Community building as a foundation for religious working. Necessity of the Threefold Social Organism. Youth Movement, authority-principle; building of cliques. Task: enlarge the present number of people in the group. How can the Threefold impulse work practically in the realm of the religious life? Example: marriage. Divine harmony as a task of the time. Difference between a religious community and the Anthroposophical Movement. Answers to questions: Connect with the church or with Anthroposophical branches. Religion instruction in the Waldorf school. Old Catholicism. Founding of free communities. Discussion: Practical aspects: Possibility of enlarging the number of people in the group and the financing of the cause. Central office. Should all who want to work together for the renewal of religion be Anthroposophists? Preparation in theology and other areas?

3. STUTTGART, JUNE 14, 1921 (MORNING): Religious deepening is not possible without ritual. Intellectualism in modern theology. Religious instruction in the Waldorf schools; Sunday service and confirmation. Catholic Mass and ritualistic acts in the Mysteries: Gospel reading, offering, transubstantiation, communion. Working through the picture or image: pictorial speaking, symbol. On the translation by Rudolf Steiner of the Catholic Mass. Boundaries of natural scientific ideas in the example of the human being becoming physical (cell of the egg). Why renewal of religion through Anthroposophy? Discussion of practical aspects: Financing (Der Kommende Tag, Hermann eisler).Preparation for pictorial speaking. Fourteen-day course possible. Legends.

4. STUTTGART, JUNE 14, 1921 (EVENING): Questions and answers. Form of the ritual. Ritual acts of Freemasonry. How do symbols arise, and how is symbolism possible today? Living into the genius of language and speech; pictorial soul life. A modern ritual must be simple and be the expression for the inner transformation of the human being. Forming a mantra. Music in the ritual. Rituals given by Rudolf Steiner. Concerning the baptism ritual. Seven sacraments: for every evolution form of the human being there is also an involution-form. Laying on of hands. Priest vestment.

5. STUTTGART, JUNE 15, 1921: The sermon. The picture element must pass over into the feeling and into the will impulses. The significance of rhythmical repetitions. About John 1:3: the eternal and the temporal; existence and subsistence. Meditation as preparation for the sermon. Cardinal Newman’s wrestling for Christian truths. Anthroposophy as bearing the element of religious life. An example of pictorial speaking. Overcoming imaginations bound to space; the innocence of nature and the becoming guilty of the human being. Immortality and pre-existence. The Gloria. Christ brings about balance between Lucifer and Ahriman. Discussion: Preparation of a further course: place, financing, participants, promotional means, Central Office, required education. Discussion about Anthroposophy and religion.

6. STUTTGART, JUNE 16, 1921: About the nature of human memory. The astral body as reader of the esoteric script. The sacred art of writing in ancient times. The origin of the art of printing books. Goethe’s relation to color. The significance of judgments out of the folk nature, of sympathy and antipathy for a particular folk soul.